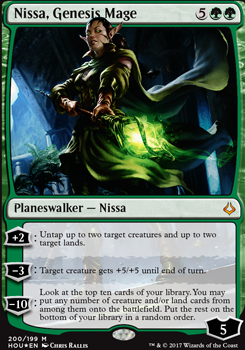 -10: Look at the top ten cards of your library. You may put any number of creature and/or land cards from among them onto the battlefield. Put the rest on the bottom of your library in a random order.

Nissa, Genesis Mage occurrence in decks from the last year

seems to do everything you want with Pride Sovereign. Mirror of the Forebears and Mirage Mirror can serve as extra copies of the Pride for more cat tokens, or even extra copies of Nacatl War-Pride =). Hope this helps.

Yz2000 on Do Sorcery/Instant and Planeswalker buffs ...

I have a question in particular, involving Sharktocrab , who I've recently gotten in a booster pack.

His ability says: Whenever one or more +1/+1 counters are put on Sharktocrab, tap target creature an opponent controls. That creature doesn't untap during its controller's next untap step.

I'd like to know if this applies only once for each set of counters, or for each individual +1/+1. Some examples are below.

Scenario 1: I use Primal Bellow , which gives +1/+1 for each forest I control. I have eight forests. Thus, the total buff is +8/+8. Does that mean that Sharktocrab 's ability is triggered eight times? And does that mean I would consider there being 8 +1/+1 counters on the card, or would it be considered one large '+8/+8' boost, lumped together?

Scenario 2: I use Nissa, Genesis Mage 's second Loyalty ability. â3: Target creature gets +5/+5 until end of turn. I'm not very sure if this would be a similar case. I figured Planeswalker Loyalty abilities might be slightly different from the first scenario, in some regard.

In general, I think I have some misconception on how buff/debuff counters work. This is partially due to the Adapt ability on other creatures, where they specify 4 +1/+1 counters. I'd be really grateful if someone were to clarify this with me, and also explain how Sharktocrab 's passive ability works. The rulings didn't say anything about that, when I referred to them.

Thanks for the feedback, ZendikariWol! Metallic Mimic is something to look into.

I don't run Coat of Arms because I don't really token much with the deck, and there are definitely others who do in my meta. Thay'd benefit more than I do using it.

I never even knew Kindred Summons existed! That's gonna take some testing for sure.

Mentor of the Meek would probably do some real work! Definitely gonna nab one.

As far as Nissa, Genesis Mage's role, she isn't ramp at all, but an engine. Her first ability is all Stax. It enables mana elves to tap again, additional Parlays from Selvala, Explorer Returned, and untaps lands to cast whatever gets drawn. If I'm using her - ability, I've probably already got the win. I don't run planeswalkers expecting to actually get their Ult off, but if someone actually lets Nissa stick, I will definitely punish them with a Genesis Wavex10

Give it a playtest, you might find it fun!

Okay sorry if I'm not a ton of help here, I don't play elves with white.

Metallic Mimic and Coat of Arms would be nice to pump your guys up. Consider Kindred Boon for protection and certainly Kindred Summons. Sundering Growth isn't huge power but pretty nice. Mentor of the Meek may be worth it, despite the bad creature type.

Nissa, Genesis Mage is pretty terrible, I think. A simple Signet would serve you better for ramp, and for the ult, well, Kindred Summons.

Though I see some ways to make creatures have it, not seeing enough 'Trample'. Very weak to chump or recursion builds as playing more than 1 or 2 big threats a turn might be tough, even at Instant speed. For example, Primeval Protector... seems like Ghalta, Primal Hunger would be a better fit in that slot. Could have missed a card or interaction, but only seeing 9 interactions for Panharmonicon. Might be worth cutting it all together, unless moving into an ETB strategy like MFarrar mentioned. Nissa, Genesis Mage is kind of confusing. Adding things like Genesis Wave and Primal Rage might be good adds if you'd prefer not to have Trample on all creatures built in. Agree with MFarrar about diverisfying the non-basic lands. Ghost Quarter, Maze of Ith, Temple of the False God, Reliquary Tower, Command Tower, Command Beacon, Nykthos, Shrine to Nyx, and Field of Ruin are just to name a few.