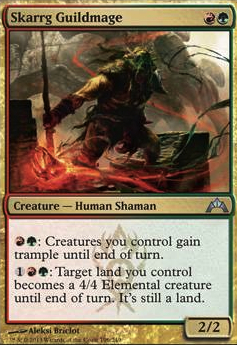 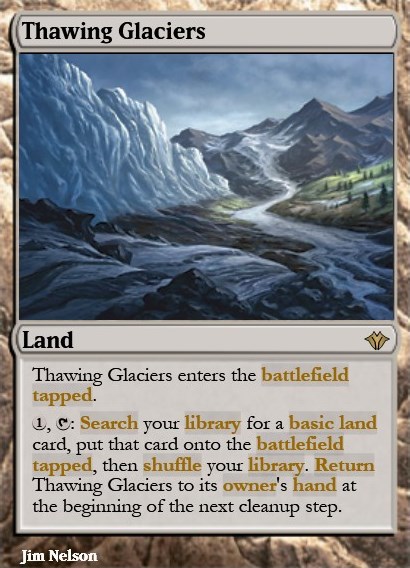 Green has a plethora of land grab.

Red has a plethora of destruction.

What about Skarrg Guildmage for another source of trample

Probably Skarrg Guildmage. If you want to go even further, you can swap Tattermunge Witch for Zhur-Taa Ancient.

WrathofCod I switched to Omnath, Locus of Rage because he is a very powerful general. He does have a significantly higher mana cost than Mina and Denn, but what he does is worth the high mana cost. Plus I use a ton of ramp in the deck, allowing me to get him out with ease.

Glacial Chasm is a great card to abuse with M&D because you can play it, then bounce it back with their ability an play it when the board isn't in your favor. If you are worried about the lands being sacc'd, you can play cards like Splendid Reclamation or Groundskeeper; or if you have it, Crucible of Worlds.

I like any card that gives you a body whenever you play a land (for chump blocking and attacking), which is why I suggested Sporemound. It does, however, have amazing synergy with Perilous Forays, as you can sac the tokens produced by Rampaging Baloths, Angry Omnath and the mound for a large number of landfall triggers (it's super awesome when you have another token generator out). If you want to be able to fetch out every basic land in your deck, you can combine Perilous Forays with Amulet of Vigor and Lotus Cobra; and to a lesser extent, Stone-Seeder Hierophant. Fertilid does a similar thing with Retreat to Kazandu as the above combo, but requires more mana.

Descent of the Dragons is a fantastic board wipe imo! I was considering adding into Angry Omnath because you can attack with your elementals and then main phase 2 blowing them up with Descent and bolt people to death. In this deck, I think it'll be pretty good if you have a bunch of 1/1 creatures out since you can attack, and then blow them up for 4/4 fliers. There are some other board wipes that would be good in this deck, such as Blasphemous Act, so depending on how you feel, I think the latter should be considered first but the former is a great option too.

I think the eldrazi do pretty well in here, as you can play land/ramp into tokens and then play those, I think it'd require a bit of testing, so it depends on the outcome of games. Oblivion Sower has synergy, allowing you to play lands that you exiled with him for more landfall triggers.

As for some obscure cards in the deck, I love Signal the Clans as a tutor. The randomness makes it enjoyable too. Oran-Rief Hydra gets ginormous over time, same with Undergrowth Champion.

For cuts, I'd recommend cutting mana dorks since you mainly want to ramp via lands due to the value you get from them. This also allows the deck to be less reliant on your commander too. Burning-Tree Emissary seems rather mediocre for EDH (she's amazing in Modern and Pauper though haha), along with Plummet and Naturalize. Paragon of Eternal Wilds also seems a tad mediocre from its boost and effect (you have Skarrg Guildmage to give all your creatures trample).

This deck is coming together very well, no problem and thanks for the upvote on the primer!