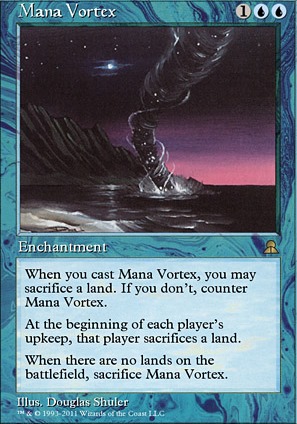 When you play Mana Vortex, you may sacrifice a land. If you don't, counter Mana Vortex.

At the beginning of each player's upkeep, that player sacrifices a land.

When there are no lands in play, sacrifice Mana Vortex.

Mana Vortex occurrence in decks from the last year 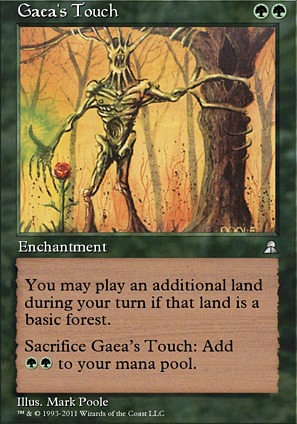 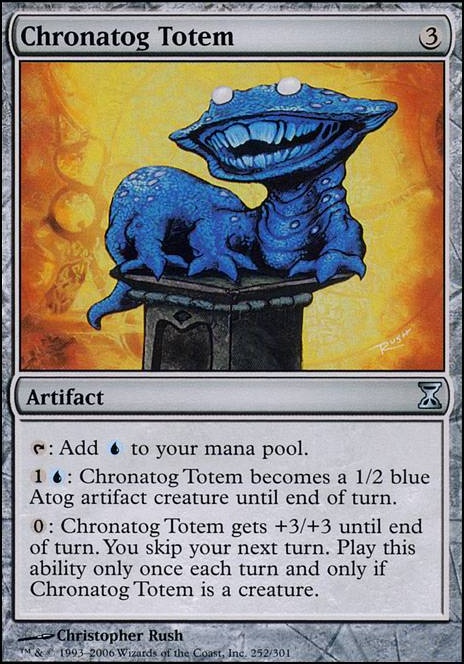 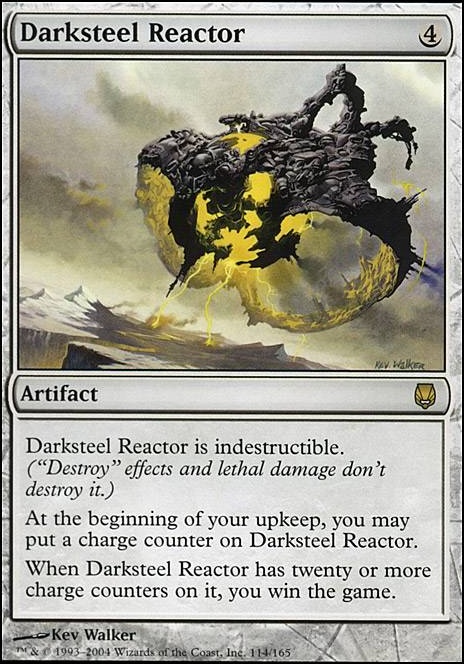 multimedia honestly, for mana disruption, I'd go for Mana Vortex , the Bitterblossom / Contamination line, or even Desolation on a budget before Overburden or Mana Breach , otherwise, I'd also recommend Necromancy for reanimation, having 'flash' is pretty good, even if you sacrifice it.

So my initial thoughts are: You've got WAY too many ways to get extra lands; while each one of these is: "tap: draw a card, gain 1 life" in Tatyova (with something like Simic Growth Chamber ) it doesn't mean that you need nearly that many.

The large number makes this feel like a land-ball style, where you just keep balling lands until you hit a win condition ( Storm Cauldron + Stasis / craterhoof). That's great, but quite cyclical. So my initial suggestions look at the following factors:

1: You'd like this deck to have a lot of replay value and be strong. 2: You don't want this deck to be -too- strong that it gives you a bad rep.

With both of those factors in mind, I'd like to ask: there are many types of Tatyova builds you could go for, what playstyle/archetype suits you and your playgroup best?

For example, Tatyova works with a lot of archetypes.

Another is control, wherein you use lands and catch-all cards to slow opponents down while you find/grind a win (find/grind meaning - you either find your combo or win con, grind meaning that you go in for the beat-down strat with Tatyova and value creatures).

Traditional lands is another archetype that plays similar to control, using silver-bullet land cards to hinder or stop your opponents, while you find your engine/win condition and end the game from there. Classic win conditions include: Dark depths + thespian stage. Azusa + crucible + strip mine.

Storm is a simple way to play Tatyova - you play a midrange until the turn that you're ready to go off, and at that point you get to really show some explosiveness (this is often dull for opponents if you're not fast/well versed with storming off alone).

Value-town is another major archetype that Tatyova lends herself well to. Plenty of great cards have good synergy with this: Patron of the Moon , Patron of the Orochi , Liege of the Tangle , Multani.

Stax is my personal favourite and what I built before moving to storm, as stax-yova allows you to run cards like Mana Vortex alongside Crucible of Worlds and Life from the Loam in order to create a boardstate where your opponents are suffering beneath tax effects and you are creating a gap of disparity that is insurmountable.

There's others I'm sure, but these are the first few to come to mind.

@TheNocholas It's possible to build Lavinia on a budget but you likely wouldn't be able to hang at cEDH tables which is where she is best. I've encountered Lavinia decks in the wild at LGS's and sitting at a table with three normal EDH decks she just isn't that good. Plus, good luck ever getting Omen Machine or Knowledge Pool on board. People will be holding counters for them.

For Lavinia you really do need the Moxes, Crypt, Vault, Force of Will , Land Equilibrium and Mana Vortex (optimally Ravages of War too) Those cards alone will run you 500$ if you're lucky