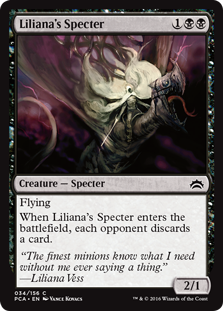 When Liliana's Specter enters the battlefield, each opponent discards a card.

Liliana's Specter occurrence in decks from the last year 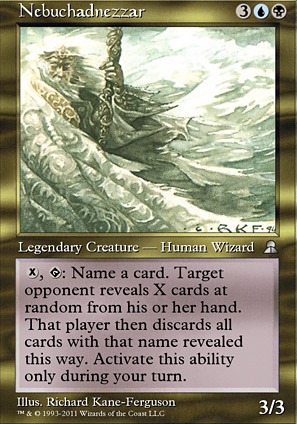 Some cards that I run in my The Haunt of Hightower deck that may be of use:

Reanimate or Animate Dead , depending on budget and collection; with so much discard you'll likely find some juicy targets in someone's yard. Same goes for Beacon of Unrest .

Liliana's Specter , hits the table with the discard, flying body just a bonus. I'd use this rather than some of your more expensive single target discard spells as this is multiplayer and its hard enough to punish the table playing discard.

Tasigur's Cruelty again, hits the table and you're not likely to be paying retail on this.

Bolas's Citadel better with Haunt as the lifelink there keeps this going but this is still an obscene card.

Rankle, Master of Pranks the haste, evasion and multiple modes are all good.

Waste Not More resources for you as opponents lose theirs.

Not sure about Dismember , Hero's Downfall or Vraska's Contempt would probably be useful more often in this spot. Though I suppose if your meta plays a lot of indestructibles, then Dismember may be the answer.

I had Dark Deal in an early version, but dont love that it hits me for minus one draw as well. and the one time use for Hymn to Tourach was what kept me from picking it. But that being said, i really like Arterial Flow .... 3 mana for opponents only to discard 2 each.. beautiful - and chances are i will have a vamp in play as well. That one is definitely going on my buy list.

I have played this a couple times, and I find it super fun but have absolutely no win condition on it (which is fine for now as long as we have fun playing), but not sure about creatures yet. Of the 3, i like Liliana's Specter only because its an ETB and not a hit the opponent ability. Will know more after more playtesting

Totally missed Creeping Dread and a few others.

If you really want to build into opponent discard though, consider Arterial Flow , Dark Deal , Hymn to Tourach , Dreamstealer , Hypnotic Specter , or Liliana's Specter . All of those options cost 3cmc or less and are $ cheap as well.

Good luck with the build, I will post back if I come up with anything new.