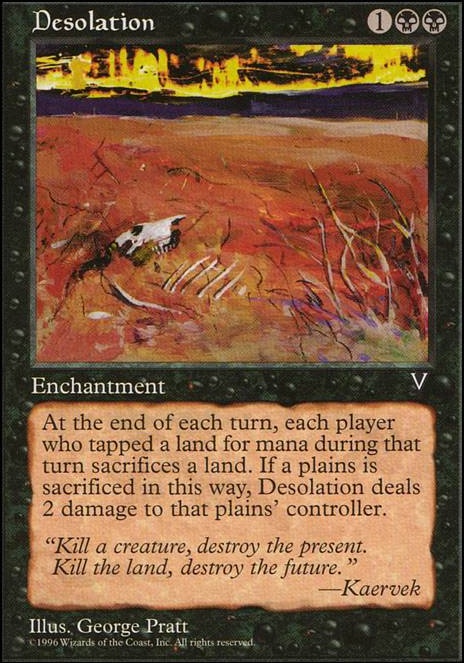 At end of turn, each player who tapped a land for mana this turn sacrifices a land. If a Plains is sacrificed this way, Desolation deals 2 damage to that Plains's controller.

Zur, The Whispering Madness
by Capt.McMorris

Zur the real enchanter
by Esper236

I think I saw this deck in How To Win Friends And Influence People, listed under what NOT to do.

It's missing Smokestack, Smoke, Meekstone, Curse of the Cabal and/or Desolation, unless those were intentional omissions.

Field of the Dead feels like a slam dunk in here.

Valakut doesn't have that many hits given your 8 mountains (including if Thespian stage is copying a mountain). Obviously this changes if you're running Dryad of the Ilysian Grove, but I think you'll still want more nonbasic land searching with Expedition Map or maybe even Tempt with Discovery to find those pieces.

Desolation could be a way to leverage your land advantage (and deter some interaction) and get more lands in the graveyard to recur or to trigger Titania, etc. (Squandered Resources, too).

There's this nifty little card named Desolation . I think it could be fun ;).

multimedia honestly, for mana disruption, I'd go for Mana Vortex , the Bitterblossom / Contamination line, or even Desolation on a budget before Overburden or Mana Breach , otherwise, I'd also recommend Necromancy for reanimation, having 'flash' is pretty good, even if you sacrifice it.

May All My Problems Wither Away [Conquest]

DrukenReaps That's true. I agree that it's at least 5 snakes, if not more if Ammit Eternal survives by my turn, making it possibly a few more, compared to the guaranteed 3 from Shambling Swarm . I would say that at least Shambling allows for removal for a X/1, X/2, X/3 on the board, AND, making 3 snakes. But I will admit that it's a top pick for cutting. Especially when I found out Desolation exists, heh. Possibly Gate to Phyrexia if I come across a lot of artifacts.

willis1234 so there I was, minding my own business looking at Stax cards for a deck idea, because I'm such a great player, and I find out Desolation is a thing. Black land removal of 1 per turn? More if player's cast on each other's turns? I don't know how I never heard of it. Thought of your deck since I was just here.