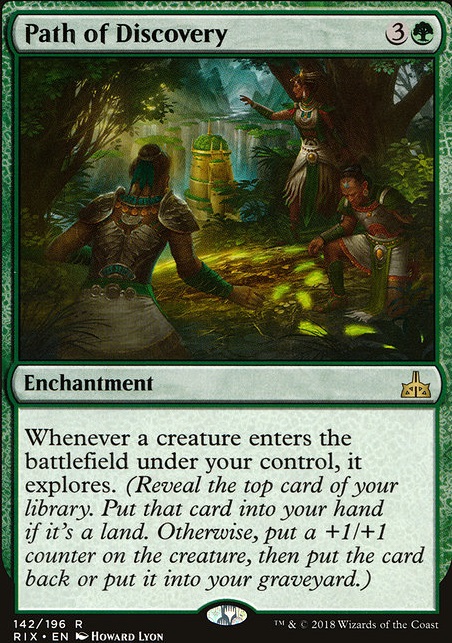 Path of Discovery occurrence in decks from the last year

A Focused Polukranos
by turtlesbedank

Behold The World Awakened
by Rant Epicurus thanks for checking my deck man :D.
i really like Karador and i am trying always to improve him.
Beast Whisperer,Skullclamp,Audacious Thief,Oakhame Adversary,Mindblade Render,Yawgmoth, Thran Physician are all amazing draw engines. Sometimes i forget i have them and neglected to tell you to add them.
on that idea also add Guardian Project and Path of Discovery they are really amazing enchantments i had to cut them out because they costed 2 much. But i still like them.
Runic Armasaur believe it or not is the first to be swapped out when i find a replacement because he is too cirumstancial.
Finally i do love Syr Konrad, the Grim but my meta is too fast for that.I tried him and really like him but 5 mana is too much for the slot i wanted him for (protect my graveyard). I don't need his damage to end the game so i had to remove him.
Thanks for checkning my deck :D

Funkydiscogod Persist + Path of Discovery + Hardened Scales (which Icbrgr mentioned) could build a pretty cool engine for sure imo. I'll try it asap and let you know if I find a consistent combination within that template.

What's your opinion on the combo Path of Discovery Viscera Seer Murderous Redcap? You can use other Persist creatures, like Kitchen Finks for infinite life. If you have a Wildgrowth Walker in play, you also get infinite power.