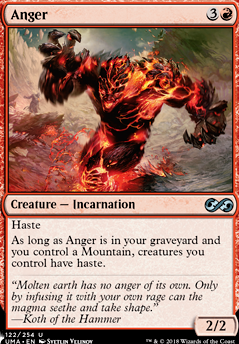 As long as Anger is in your graveyard and you control a Mountain, creatures you control have haste.

Anger occurrence in decks from the last year

I'LL say when it ends!
by superwill123

Life of the party
by TipsyEmu

Here are a few of my thoughts: Seeing that Wyleth incentivizes you to go all in on Wyleth, there are a few things Wyleth appreciates. 1) Number 1 priority is protecting Wyleth. Wyleth has no inherent protection, and will become the target of removal when you get a ton of equipment an auras onto it. I think Mother of Runes and Giver of Runes are both excellent inclusions for this. Sejiri Shelter Â Flip can double as a land but also be a protection spell. Depending on your budget, Deflecting Swat and Flawless Maneuver are both excellent options for protecting Wyleth (for free!). 2) Wyleth really appreciates free equips. You're already running Ardenn and Sigarda's aid. Brass Squire is another good one to include. Hammer of Nazahn also free equips your equipment when they enter the battlefield. Magnetic Theft is okay, but only works once. Auriok Windwalker is a bit more clunky but also gets the job done. 3) Wyleth really appreciates haste. You want to slam down Wyleth, get him suited up, and be swinging in right away to get the card draw ability, so haste is very appreciated. You've already got a handful of equipment that give haste. Crashing Drawbridge is an excellent creature that blocks early and gives haste. There are enchantments that can give haste like Fervor and Hammer of Purphoros. There are other creatures that do it like Anger, Urabrask the Hidden, or even the land enchantment Footfall Crater.

So that's a lot of card suggestions, and I'm not suggesting you run all of them. Make sure you have the best options from each category and that you have enough of them.

Looks like you have a lot of really good options to try out here! What Commander are you most leaning to at this point?

Mass Hysteria, Concordant Crossroads, and/or Anger might be nice so your massive wurms can attack as soon as they hit the table!

You are 100% correct Geschlechts

From the games I have played so far, I have noticed that haste is an issue. This would also remove my reason for having Overwhelm over Overrun.

Of the 3, I am thinking Anger and Fervor. Anger because I do have the possibility of discarding it, which would mean free haste, and Fervor simply because artifacts are a little easier to remove than enchantments in my playgroup.

The issue now is trying to figure out what to remove, that's always the difficulty.

I'd recommend some haste on those snakes. At least for when you play a wheel on your turn.

Anger, Fervor, Hammer of Purphoros are a few good options.