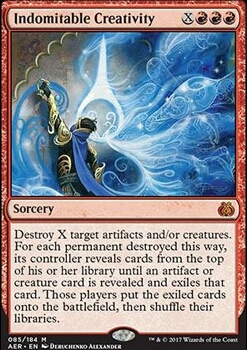 Destroy X target artifacts and/or creatures. For each permanent destroyed this way, its controller reveals cards from the top of his or her library until an artifact or creature card is revealed and exiles that card. Those players put the exiled cards onto the battlefield, then shuffle their libraries.

Indomitable Creativity occurrence in decks from the last year

Norin, Tries to Win
by Jerakin 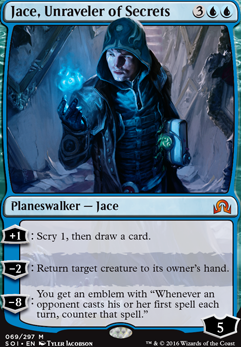 Thank you so much for taking the time to write that up! It is super helpful.

After further consideration and hearing what you say I think you are right about Hedron Archive, with a few other mana rocks we could get it in play a lot earlier too.

Oh wow I totally missed that Ignite the Future and Light Up the Stage said until the end of your next turn! That changes a lot. Will be picking them up for sure then, especially with them being quite lite on the wallet.

I think you are right with both Etali, Primal Storm and Sunbird's Invocation too, with a bit of ramp they might both be great.

Some of my thoughts of the cuts.

Impending Disaster does serve my game plan a bit. I would put down a few enchantments/creatures that does damage as Norin blinks then remove all the lands to win me a few rounds of free damage. But it definitely makes people hate you and is worth cutting for just that reason.

Molten Vortex, agree it should go.

Pandemonium, agree it should go. What tends to happen is that I get a few bounces with Norin in but then someone else drops a bomb or 10 tokens.

Shifting Shadow, yeah I only use this one if I know what my opponents deck is capable of. But a lot of times it is too scary to use or it's a "I kill this thing I lose" but I can probably find something else to do that.

Task Mage Assembly, oh yeah I forgot I was supposed to cut this when I got got hold of a Pyrohemia.

Vicious Shadows, agree definitely too slow. I have never used it...

Forgotten Cave, well with as many lands as I used to have being able to cycle one is kind of nice xD

Great Furnace and Darksteel Citadel, plan is to use it in combination with Confusion in the Ranks and Indomitable Creativity. But yeah, not really that great of a plan.

Springjack Pasture, Agree it's so bad, have no excuse/game plan for this one.

Brimstone Mage, yeah never really managed to use it effectivly. The plan was to combo it with Embermaw Hellion and Torbran, Thane of Red Fell.

Squee, the Immortal In a perfect world he is "2RR Draw a Card and Deal 1-13 Damage to Any Target." with a repeat button, but that's so slow and at that point I am probably already dead. But tbh the main reason he is in the deck is because he looks so silly. :|

Workshop Assistant, yeah you are right

Crystal Chimes, maybe not enough. But they are kind of my game plan :|

Lotus Bloom, more often I would use it to be able to get of a surprise spell or being able to drop two things on one turn. But I do have other decks that it could do a lot of more work in.

Storm Cauldron, never actually gotten this one out (nor had it my hands) so not sure how it would pan out but I bet you are correct.

Indomitable Creativity, yeah this is mainly for "funzies" used on myself it can be "okay" used on others it's either I lost or I delayed them winning a few turns. Neither really makes me win faster.

I will definitely use this as a base for when I start adding some of the recommendations you mentioned in your previous post. Again, thank you so much for taking the time to write it out.

Please let me know if you ever have some ideas or if you find a new card in your deck that you really like.

Treasure is the Root of all evil

Why do I never see Indomitable Creativity in any list? I run it in my Locust God deck and it is a game winner. If you had an Ashnod's Altar it would be more efficient then Phyrexian Altar, but they both could add to X if you needed more mana, use the tokens as sac fodder for Creativity and get half your deck onto the battlefield. Never have to go for more than about 20 and there's no way one should lose after a turn like that.

Gate to the AEther creates some amazing shenanigans. So far, I've resisted putting it in, mainly because I need to pick the card up, and, I struggle with what to pull out of the deck in its place. Ugin's Nexus is a possible target, but that's a card I actually want to sling, so I would be removing a fling target for a non-fling target. I already feel like I have too many of those. I will give this more thought, but hit me up on possible swap targets.

Indomitable Creativity, man do I wish this was an instant. I don't know if I have enough deck stacking to work here, but synergy with Myr Retriever, as you said, is good.

I hadn't even considered Lukka, Coppercoat Outcast and his middle minus ability is looking really attractive.

Wouldn't it be great if Shifting Shadow was an equipment so you weren't compelled to find a target for it, one you may not want to lose or can't yet fling.

For syngergy with Myr Retriever, you have