Lands you control are every basic land type in addition to their other types.

Why Fight the World When you Know Who Will Win?
by MTGSmith 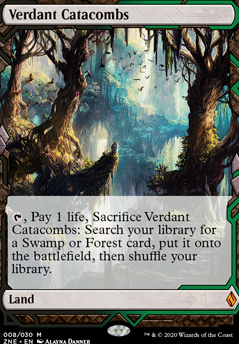 And We All Lived Happily Ever After

Dryad of the Ilysian Grove does the same thing as Prismatic Omen, but letâs you put extra lands into play.

Solid suggestions. Instead of Prismatic Omen im using Dryad of the Ilysian Grove. Instead of Chromatic Lantern, I am trying Skyclave Relic just because its indestructible and my mana is usually pretty well fixed.

Outlaws' Merriment seems ok, but it doesn't give me a creature immediately and the creature I get is random. I'd run it if the deck didn't already have space issues.

Hey! Iâm sorry it took so long for me to post here, Iâve been so busy!

Something I have found useful in 5 colour decks is Chromatic Lantern or cards to the effect, Prismatic Omen is another one. I just find it helpful to not have to work out my available mana xD

Another idea would be Outlaws' Merriment - if you can get this out with Mana Echoes youâll get that mana every turn to activate your commander straight away, which could be useful to do before your draw step.

I think the deck is really cool, itâs a bit out of my comfort zone so Iâm sorry if my suggestions arenât the best.

Also would need to keep those land drops going with some coming and going of the lands. Cards like this that put Lands back to the hand, Trade Routes and cards like Walking Atlas that can put them right back out. other cards I would consider if the price is right. Prismatic Omen, Dryad of the Ilysian Grove, Nyxbloom Ancient, Crucible of Worlds, Rites of Flourishing, etc. Good luck :)

Yours' is a great decklist that I always come back to when looking for guidance in improving my own Windgrace deck. +1 from me.

I have a few questions on some card choices within your list, and I'd like to hear your input on them. In your experience, how consistent has Valakut, the Molten Pinnacle been with Scapeshift, considering the fact that Prismatic Omen isn't in the deck? Has Dryad of the Ilysian Grove on its own been enough to enable Valakut sufficiently?

Also, the new Valakut Exploration has not been adopted in Windgrace lists as widely as I initially expected, at least on this site. What are some of the reasons why you decided against including it, and is it a card that you feel doesn't make the cut for Windgrace lists in general?

Hey SteffisPeppis, I appreciate the suggestions. I did not consider cards such as Perilous Forays and Phylath, World Sculptor due to having only four basic lands in the deck. Prismatic Omen would fix the basic land problem, but to me, at least, itâs not worth making room for the bunch. Karametra, God of Harvests and Leyline of Anticipation, I have considered. They just didnât make the cut in the meantime. Very possible they can be added down the road. All are still viable options if someone wants to build around including them. Thanks for the suggestions!