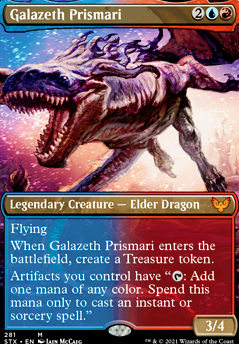 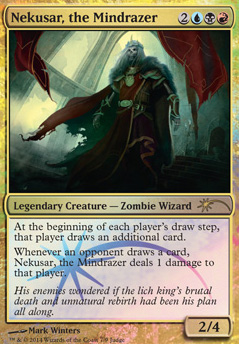 Rashmi The Shaper
by charizardude7050

Thanks for your feedback! I threw this together to get an idea of how it would play against my group with the cards I have since I haven't built anything simic in a long time, however you're totally right. The main issue I had was with draw. Initially I was focused on the ETB trigger value but as I was playing I was thinking of other ways I could balance the deck out. I also think it might be good to add another wincon like Laboratory Maniac/Jace, Wielder of Mysteries + Blue Sun's Zenith was well. Simic Ascendancy almost won a game as well with the Scute Mob combo.

I'm certainly going to add a few of the cards you recommended (The Great Henge is a bit expensive for my blood right now) and fine-tune things.

According to an old myth, a king once posed his advisors an awkward problem: how to prove whether a crown was pure gold. The guy who figured it out was stumped until he took a bath. As he sank into the water he noticed his body was displacing it, and in a moment of epiphany he realized this was a method to check the crown. Evidently, this was such a stimulating realization that he jumped clean out of the bathhouse and took off down the street, buck-ass nude and shouting âIâve got it!â

Youâve probably heard this story, and know the point Iâm making: the Izzet League, Guild of Engineers and Magewrights, can best be described as a pack of over-caffeinated nerds hell-bent on chasing moments just like that. Coincidentally, this parallels the experience many magic players pursue in a given match. While you can have those moments doing anything, if youâre looking to thematically mimic Archimedes at the moment of streaking epiphany, preferably laying aside public indecency, Izzet the place to be. Today, weâre discussing commanders tied to three prevailing Blue-Red themes: Storm, Chance, and Gunslinging. As always, please bear in mind that our focus here is not necessarily competitive but rather on thematic, archetypical commanders.

I donât necessarily mean the keyword, though Thousand-Year Storm is admittedly a favorite: I mean instants and sorceries as an overall theme. Bear with me on this: If I were to assign a card type to each colorâ¦

Understand that my suggestion here isnât that any color has the best of the associated card type, but rather that each card type is among the colorâs primary thematic interactions. Green has the closest relationship with lands, Black kills/resurrects/abuses creatures, etc. Sorceries, being generally cruder but also more powerful than instants, tie in thematically with Red, which is cruder and... not more powerful, but definitely more direct than Blue, a subtle and minimalist color.

Izzet, then, has a primary interaction with both instants and sorceries, focusing on non-permanent spells in order to capture the thematic essence of spellcraft. If you want to rock the hell out of the game by wizarding it up, I have some commanders for you to Ponder!

Simple, potent, and tasty. A copy of any given spell is welcome, and firing from the hip off the top deck is quite thematic, quasi-literally throwing ideas at your opponents, technically before you even have them.

This is very pretty art, and while maybe not the best choice for slamming down massive X drops, for raining down a pile of cantrips Veyranâs your best friend. Who would say no to getting bigger whenever you cast a spell AND doubling both the cardâs own effect and that of any accompanying triggers, like Archmage Emeritus, Aria of Flame, and Firemind's Research? With a potential for solid command damage AND a great doubling effect, this is a fantastic commander.

Or, if you think cantrips are for wusses, Vadrik is probably more your speed. Power him up with, say, the Runechanter's Pike, wheel a few times, and unleash all manner of insanities by slamming down a hideously overpowered Banefire or Blue Sun's Zenith. Heck, go for broke and play Epic Experiment while having Thousand-Year Storm out as well. If anyoneâs still alive after your thirty-minute turn, theyâll probably have lost all will to go on anyway.

Just as this is the pairing of inspiration, Izzet is also about boom-bust gameplay. Thereâs an element of chaos to it, yes, but rather than inflicting lunacy on everyone Izzet also has the potential to ride a private brainwave straight across the finish line, whether in control or not. Sometimes your plan will go off like an atom bomb. Sometimes it will fizzle, wheeze, and grind to a sad little halt. Regardless, that type of gameplay will be a LOT of fun.

I did promise to talk about a coin deck back in the Red article. Okaun is potentially (unreasonably) large, Zndrsplt occasionally supportive. Seeing them together is worrisome: three lucky tosses and Whispersilk Cloak or something like will kill an opponent, and itâs not unlikely. Add Krark's Thumb and youâll probably overstock your hand, break a thousand P/T on a single creature, and strike a blow for gamblers everywhere. Bring mana rocks, bring evasion, and above allâ¦ bring Fling.

Wheeling is a mechanic that clearly illustrates chaos in magic, both for good and for bad. Doing it every time you cast a spell? Glorious. No plans. No guarantees. Just making like a leaf on the wind. Any win you get out of this commander is EARNED.

Nekusar, the Mindrazer, the sphinx-that-shall-not-be-named, or Smothering Tithe ruining the local meta? Have I got a solution for you! Jump across that fuzzy line of lunacy Izzet players so love to skip along and never draw a card again. This is neat, completely sidestepping a fundamental mechanic of the game. Throw in a few permanents that draw at instant speed, wizards are good like that, and tot up options as needed. I am very, very excited to see decks built around this.

This is wordplay at its worst, and I apologize. Again, I donât necessarily mean commanders that ping you to death. Rather, I mean commanders that are trigger-happy on the draw, or vice versa. The act of drawing is, in metaphorical terms, new ideas coming to you over the course of your wizardly duel, and ideas are very much in the provenance of Izzet. Itâs only appropriate that a few commanders in this pairing either reward you for having lots of ideas or ensure you have lots of them. Obligatory mention of buggy rewards from The Locust God and Kindred Discovery goes here.

And, of course, this is where Wattles the Wizened himself comes into the conversation, being exactly what the theme sounds like. Draw cards, give him deathtouch, and torch the board. Go for broke on this moldy old cheese and attach Ophidian Eye. Itâs not exactly creative, but itâs certainly effective.

You know, compared to Jhoira of the Ghitu this is practically calm, but people donât really respond to her that way. Iâd like to profess ignorance as to why that might be, but having built several artifact combo decks I really canât. Sheâs a solid choice, not that offensive in and of herself, and I recommend her to anyone not willing to go full Breya, Etherium Shaper.

This is one I wouldnât immediately recommend to anyone angling to compete, insomuch as one can in a casual format. However, as the literal god of insight and inspiration (and smiting Zeus-style), heâs thematically perfect. Depending on what you draw, you either get another card or a Lightning Bolt. On an indestructible, sometime 6/5 creature, thatâs pretty nice. If your deck is of a caliber where it doesnât depend on its commander, this is a very innocuous choice thatâs going to mislead a lot of people and yet still get you a lot of utility.

And, for my personal favoriteâ¦

She tried to replace my Okaun/Zndrsplt deck. She tried, and failed, but I still have a great deal of affection for her. This is a commander made to wheel all day who has the color access to nearly every instance of that mechanic. Fill that graveyard with ephemeral goodness, sprinkle a few evasion cantrips for flavor, and tag opponents HARD with a sweet old lady. Then bake them cookies, just to rub it in. Seriously, someone teach their grandmother magic and have her play Rielle. Youâll break the internet.

That's it for this round. Thoughts and questions are welcome. I hope you enjoyed it, and will come back soon for an old favorite, Golgari!

Epidilius on Did I just solve white's â¦

I've always agreed with "White doesn't want card advantage. White just doesn't want you to have card advantage as well." Basically, white doesn't try to pull ahead like the other colours, it just tries to slow things down enough that it doesn't need to pull ahead. It doesn't matter how many tutors you have if Aven Mindcensor is in play. No point in casting Blue Sun's Zenith with a Spirit of the Labyrinth on the board. White is the great equalizer in MtG, it levels the playing field (literally, with Armageddon) to ensure fair play among all players.

timelord I'd consider Diviner's Portent to work more like a better version of Blue Sun's Zenith in this deck. Since Grazilaxx, Illithid Scholar allows you to have such a massive hand size, I found it really doesn't matter what you roll on the d20 (the cards you have in hand + the number you roll is usually higher than 15. In my Grazilaxx deck (Grazilaxx, Card-Draw Fiend) Diviner's Portent works as Scry X, Draw X

Made a deck similar to this a while back. I found Blue Sun's Zenith a better finisher because theoretically you could fetch for both that or Grand Architect with a Drift of the Phantasms Drift of Phantasms.

Arthur_194 Thanks for the suggestions! I switched from Blue Sun's Zenith to Stroke of Genius because it has fewer mana pips to worry about. Given the large amount of colorless mana the deck holds onto, it proved more consistent.

I used to run both Everflowing Chalice and Astral Cornucopia, but overtime they were replaced with Mana Crypt and Mana Vault.