Lords and Ladies, welcome to this evening of joy and lust. Kynaios and Tiro of Meletis have invited you all to a party at their new castle. Slowly, the guests start showing up, everybody gets a drink and little somethings from the buffet. Finally, after everyone's arrived, the doors get closed (Did you hear a lock? Must've been something else.). Now, as the valued hosts enter the stage, something seems off about their speech. They used to be full of words light and happy. Today, they seem tense, and hostility drips from every single one of their words. Everybody seems disturbed. And in the second they finish their last sentence of gory vengeance, hell breaks loose, as several colossal creatures, not unlike humans, emerge from the ground, rubble and roil bursting everywhere, digging an unexpected grave to the guests. "Oh, why'd I have to go here, again", are your last thoughts before an enormous fist yeets you into the next wall, ending your life with a loud crunch.

Hide your loved ones! The giants are coming!

This deck hits the table in an unsespected manner. With Kynaios and Tiro of Meletis at the helm, we'll often be expected to be a grouphug deck. We ramp and/or fix our mana (ooh, isn't Beanstalk Giant a cool card?) to drop the commander more or less on curve. And whooosh goes the grouphug. But what's that? Why is the grouphug list dropping Brion Stoutarm? Well, maybe it's some weird tech. A Cryptic Gateway? Is there some tribal thing going on? Ok, Stinkdrinker Daredevil is coming down, so there seems to be giant tribal happening here. Aegar, the Freezing Flame? Yup, that's tribal. You tap your two giants for Gateway? Yeah, sure, whatever.

Thundercloud Shaman does WHAT?

So now that we've drawn plenty of cards off of our boardwipe, we can drop giant after giant after giant, all the while drawing cards, dealing damage with Warstorm Surge and repeatedly wiping the field off of pesky smurfs.

The deck has a little less spot removal than I usually like, but all these enormous creatures with tacked on boardwipes make up for that: Bloodfire Colossus, Thundercloud Shaman, Cyclone Summoner and Realm-Cloaked Giant really help keeping the board clear. The same goes for Battle of Frost and Fire. Sarkhan's Unsealing turns our giants into either spot removal or even more boardwipes.

Giants don't have too many lords, but Aegar, the Freezing Flame and Sunrise Sovereign can do impressive things. Aegar and the very unsespecting Fire Giant's Fury will draw lots of cards, and both become even more impactful with Storvald, Frost Giant Jarl shrinking potential blockers or growing attackers.

Giants as a tribe are unusually stuffed with boardwipes, many of them even on creatures and one-sided. Yes, they are slow, but K'n'T really help us accelerate into these humongous beatsticks. And with a third of the deck being ginormous creatures, even a single hit off of Sunbird's Invocation can massively swing the game in our favour. A card I thought a lot about before adding in is Surtland Elementalist. Yes, it's an 8/8 giant for seven mana. It casts instants and sorceries for free? That's decent, but is it worth it here?

Turns out, yes, it is. I have some pretty impactful spells the Elementalist can cast for free: Kindred Summons, See the Unwritten, and my bigger draw spells are great targets here, and especially Rishkar's Expertise is pretty bonkers cast that way. Even if Elementalist just throws a Condemn, that's one mana I can put into other giants. Also, putting Elementalist into play before my turn with Belbe's Portal or Cryptic Gateway to swing with it right away seems awesome.

The wincon is damage. But we don't have to attack. Surtland Flinger and Brion Stoutarm can throw creatures at opponents, and as most of our creatures are pretty big, that damage will pile up to lethal amounts in no time. While Brion regains life, Flinger doubles the damage if we sacrifice a giant. There are different creatures we want to sacrifice or which help us to find something sufficiently big:

Borderland Behemoth is huge with just a few other giants in play.

Hamletback Goliath already starts off beefy, but becomes ginormous in no time.

Chameleon Colossus needs a little mana to become really big, but as I said, the deck is pretty good at ramping.

Firbolg Flutist steals a creature and gives it Myriad, basically turning our two flingers into removal with upside.

To increase our fling damage even more, there is Calamity Bearer.

Here's the custom commander I want to run from time to time: 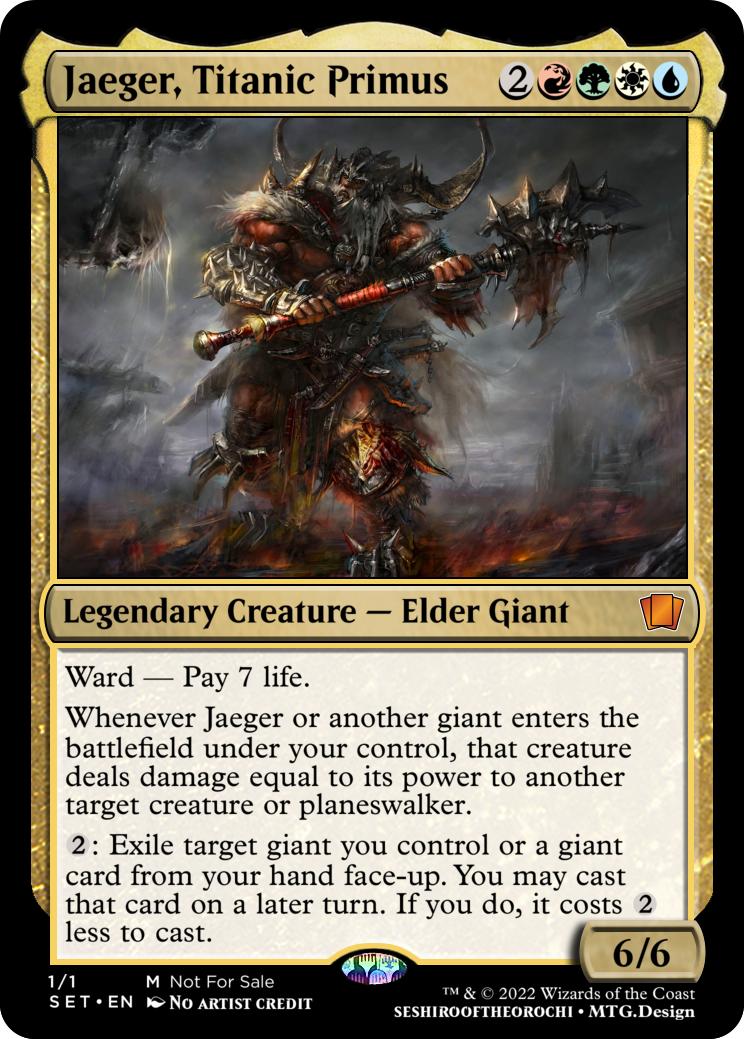 Jaeger is a massive beatstick with three powerful abilities that do a lot of what the deck wants. The ward makes it possible to kill him by simply paying a fortune of life. This seems appropriate for a four coloured Colossal Dreadmaw. His triggered ability is basically a Warstorm Surge that can't hit players, so it's great removal, but I powered it down purposely. The activated ability is somewhere between Dream Devourer and Frenetic Sliver for giants, providing both ramp for giant cards in hand and protection for giants on the board.

I'm slowly trying to build some Attack on Titan references into the deck, starting at the characters. I haven't watched the whole series so far, but I've gathered as much info as possible, so I spoiled myself to the moon and back. If you're avoiding spoilers for AoT, you have been warned.

The rumbling: Battle of Frost and Fire

The list started years ago as a headcannon-way of using K'n'T as a giant commander. After building a first draft, I found I really liked how it works, and I invested more time and money into it, slowly making it better, stronger, and more fun to play. Still, I'd love to hear your thoughts and suggestions, no matter how small or big they are. Thanks in advance!