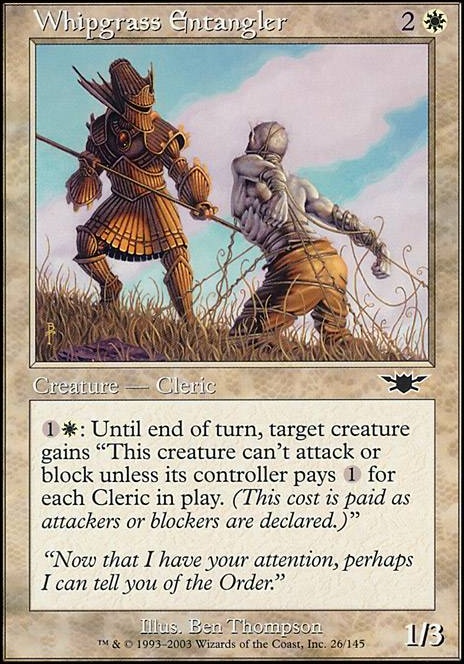 (1)(White): Until end of turn, target creature gains "This creature can't attack or block unless its controller pays (1) for each Cleric in play."

Big fan of some of your choices, tho I'd like to strongly recommend a few cards: Battletide Alchemist is arguably the best cleric next to Mother of Runes because she flat out shuts down most decks you'll face off against, especially if you have a very aggro heavy meta, though also another very worthy consideration is Whipgrass Entangler for much of the same reason, but also because it prevents blockers. Frontline Medic is also an insane addition when your main plan is swinging big with critters, and turning all of them indestructible till end of turn then post combat wrathing is such a powerful play that's caught so many of my opponents off guard. Also blue sucks, so definitely consider Grand Abolisher to fight counter magic. Finally I want to stress how powerful Twilight Prophet has been in my list. A reverse dark confidant that flies with a decent sized body, AND stunning art is nothing to be overlooked for sure.

Hopefully you take some of these suggestions into consideration, and best of luck!

This looks reall fun and good! Have you considered Doubtless One and Whipgrass Entangler? Do excuse my shameless self-plugging, but I have two cleric decks that I think would be worth a look for you :) you might find something you like: My OG Cleric deck and The Cabal's back. And they got ethnically diverse. Have a great day!

Got reallly lazy about this time, as I was also notified that my dinner was getting cold, I suggest cards like Flicker and Clone Legion.
If you have any more questions, I should have eaten my supper by then. Best of luck!

I think the deck would benefit from Whipgrass Entangler, Deathbringer Liege, and Exorcist. I also like adding Suture Priest to team Soul Sister. Batwing Brume and Withered Wretch can really mess with certain deck strategies and are broad enough to feel good in any situation. I also like Leechridden Swamp for the flavor.