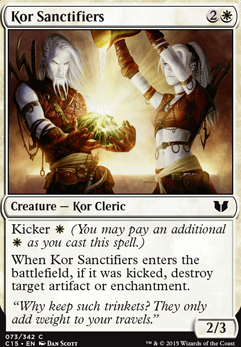 When Kor Sanctifiers enters the battlefield, if it was kicked, destroy target artifact or enchantment.

Adriana kicks your door in
by Noobincube

It's Tax Time!
by Ungodlyfreak

Yup I think a basic would do way better than the basilica, but I am prejudiced against tap lands so don't necessarily listen to me on that. XD. As for the deal with Weathered Wayfarer, I didn't even realize it could search for ANY land. Definitely don't cut that, and I have to say I think it's going to go in all my orzhov decks from now on- so thanks! Here's one way to look at it though. Your deck has a lot of creatures- which is good, especially in your deck. However, I would recommend cutting one of them for Necropotence. There may not be very many you want to take out, but necro is going to get you EVEN MORE creatures. So as for cuts, I would try and cut a creature for necro, and definitely keep Phyrexian Arena in, its amazing. As for the ramp, I'm not too sure honestly, but personally I think Kor Sanctifiers can go. I get that you could be able to keep casting and kicking it from the graveyard but that ends up being 4 mana for a 2/3, that destroys an enchantment (Etc). If I'm missing something about it sorry, but otherwise I think it could go. As for the others I'm not too sure sadly, but there are many people around the site and on formus who specialize in cuts, and I recommend asking them. Sorry I can't help more, and good luck.

Hixus and the Jailbreakers

big changes in the deck!

In no particular order:

Strata Scythe : too high of a cost for just +X/+X, even if it can win some games

Godsend : same as before, too high of a cost and it functionally says "+3/+3 unblockable", except it is not unblockable when it matters. Can stop some big threats for a while but too situational. I love the card tho.

Prowler's Helm : just wanted to cut some redundant unblockable effects. We already have enough + tutors. You only need one of them when you want to win. Choice was between this and boots and I feel that walls are more common than only-basics

Paradise Mantle : seems amazing until you realize that we don't always have a creature doing nothing on the board that wants to tap for mana

Lightning Greaves : does't help to win, and we usually don't rely just on Sram to kill the opponent, so protection is not that important

Loxodon Warhammer : this cut is done just because the swords are better. Having a tutorable single source of lifelink can save some games tho, so better to still take this in consideration.

Cultivator's Caravan : I tried it, I didn't particularly like it. Sure, good versatility. However, most of the times its just a 3 cmc rock, not that great. The ability to attack is mostly irrilevant since its very incefficient to put equips/auras on it, and blocking still requires a creature to tap for it.

Smuggler's Copter : same issued as the caravan, plus its not versatile. Too much effort to just draw and discard occasionally. All considered, I preferer to run 0 vehicles.

Stasis Cocoon : too narrow. Sometimes can be great (can target breya, fast mana and other things), but other times its a dead card with no relevant targets.

Pacifism : a lot of problematic creatures don't act through the combat phase. Therefore this card is in the weird spot of being outclassed by 3cmc alternatives (prison term, arrest) and darksteel mutation, while also being often functionally equal to Kirtar's desire for double the cost.

Holy Mantle : there are better things to do with 4 mana. Putting it on a spirit dancer is sweet tho.

Faith Unbroken : seems a good combination of pump + draw + removal, until you realize that you are just setting up a very bad 3 for 1 later on. Not terrible thanks to Sram, but there are better plays at 4 mana.

Kor Sanctifiers : the card is ok, however the lack of recursion potential makes so that there are better alternatives.

Stone Haven Outfitter : I was excited for this card being a sort of second mini-skullclamp. Then you realize that this guy passive +1/+1 actually makes skullclamp useless and you really don't want him on the field.

Drifting Meadow : having increased the number of colorless lands, we really don't want too many tapped lands. This gets cut because of the 2 cost of cycling, worse than steppe

Disenchant : here you can cut demystify instead, your choice. Disenchant is more versatile but more costly. Usually I find that enchantments are more problematic than artifacts and I really don't want to face a Stasis with the need of 2 mana open. But I can see it useful when you sit in front of a sharuum/breya/memnarch. Its up to you. You still probably want one of them for the insant speed, for sorcery speed alternatives is better to have recurrable permanents.

thunderlicous on Trying to make a fun â¦

You could use Viscera Seer to be a sac outlet to other creatures that you have a hard time getting your opponent to kill/block. The one issue I see is if your opponent has GY hate out of the board, because then you kinda just lose out on your combo, so maybe playing some sort of creature based enchantment/artifact removal, like Kor Sanctifiers would counteract that, or you could just focus on enchantment removal, like Wispmare, because most artifact GY hate that you're worried about is a one time effect, whereas Leyline of the Void and Rest in Peace just hose your deck. Wispmare also works with your combo, as it enters the battlefield and then is immediately sacrificed.