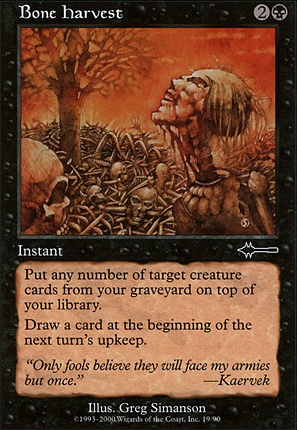 The Birth of the Swarm - [EDH]

Thank you for your question Wicker.

I'm lucky enough to have no one playing Elesh norn in my playgroup. Toxic deluge could be a problem too for any aggro deck.

Honestly, the only way to overcome this would be counterspells, a Teferi's Protection or maybe a good pump.

Recursion is the key, Gravepurge , Bone Harvest and Footbottom Feast will give you an edge with cascade.

@Ripwater: Welcome to the dark side! I'm humbled that my list inspired you to actually build the deck. She is very hard to properly disrupt and that's why I love her so much. I'll answer your questions as best I can and hope that it helps! If you have any more questions don't hesitate to ask here or in a pm.

Loaming Shaman can help at sorcery speed if you anticipate a Rest in Peace coming, or can be flashed in with Chainer to really dampen the hurt.

Bone Harvest , Footbottom Feast , and Gravepurge are instant speed Loaming Shaman style effects that can save at least your creatures from this sort of thing. I don't run them because it requires you to both have them and hold up mana for them, but again if you're experiencing a lot of graveyard hate these can help. They also don't target, so they get around things like Grafdigger's Cage.

Corpse Churn , Grapple with the Past , and Sudden Reclamation are cards that can be used to help fuel your graveyard or to protect key pieces against targeted or mass hate. I ran Grapple for a while and cut it because it wasn't a great card for filling the graveyard, and I rarely needed it to stop a Rest in Peace, but it could be much better for you.

Riftsweeper can also help dig important pieces out of exile if they get hit, but I cut it because it was dead outside of these graveyard hate interactions and not furthering my own gameplan when I'm already on the back foot didn't feel great.

(1 Continued) Why I'm only running Plaguecrafter and not the other similar effects. Plaguecrafter is quite clearly the best of these style of effects, second maybe only to the C18 card that picks a different mode for each opponent. I cut the others mostly because Plaguecrafter puts in so much work for me, but also because they're bad against wider aggro strategies like Elves or Goblins, and they're hard to reliably use en masse. If you like this style of effect, Butcher of Malakir is Grave Pact on a body, or you could just slot in Grave Pact and Dictate of Erebos. They're fantastic cards, just not my style. I don't like having too much creature removal because when I'm ahead they don't do much of anything.

Have you considered cards which have a high cmc, but can be cast for a cheaper rate like Dig Through Time and Treasure Cruise or the Emerge eldrazi like Elder Deep-Fiend, Vexing Scuttler, Distended Mindbender?

Actually Gravepurge and Bone Harvest work nicely with Goblin Charbelcher which works nicely with Grenzo... I might do this after all.

TheNocholas well I haven't used either of them.

Gravepurge is neat, effectively a reprint of Bone Harvest. I've used Bone Harvest from time to time but I would just rather use something like Rise of the Dark Realms, Living End or Living Death. Bone Harvest did save me from a mill deck once and you could use either in response to Bojuka Bog or other grave hate. If I find myself really needing an answer to grave hate then these certainly become really strong possibilities.

Liliana's Contract should be an awesome addition to the deck I just need to pick one up... The card draw will always be useful. I think especially in an apostle deck where it can be easy to play your whole hand in a turn or two. Add to that the potential to win the game on your upkeep and now your opponents have to eliminate it, you, or a demon. Not usually a good idea to draw so much attention so it is a gamble but it is also necessary to have ways of winning that don't use combat.

Another line would be Entomb, Buried Alive or Intuition fatties to the graveyard and then Bone Harvest, Haunted Crossroads them to the top.