Sliver creatures you control have indestructible. (Damage and effects that say "destroy" don't destroy them.)

Sliver Hivelord occurrence in decks from the last year 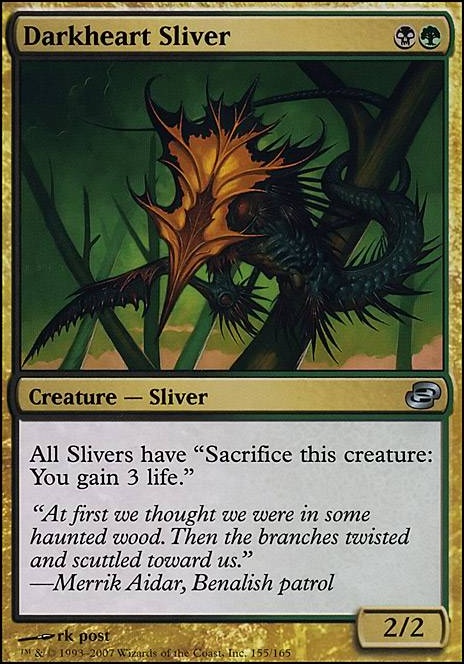 Sliver Me Timbers!
by UrbanOcelot 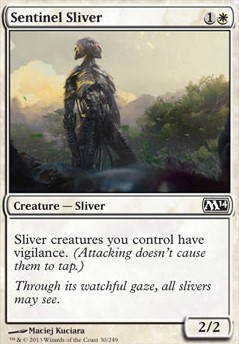 Sliver Me Timbers
by tarkch

Something Wicked this Way comes...
by Maschenist

THE ZERG ARE COMING!!!
by tornadojoe87

Ouch! Sliver! Ouch another sliver! AAAH! a sliver!
by Duperman

ChinoEX:the thing that makes Slivers get old, fast, is when you don't win. Playing Slivers in a conventional way - just attacking - will put you at the mercy of this particular tribes greatest weakness: board wipes.

Tell me another joke. But in all seriousness, that's not an issue with the tribe - it's an issue where there isn't enough interaction built into the deck. If you are in 5c, you should be running Counterspell, Negate, alot of "no, you may not" if your meta decides to shift hard in removing a large number of creatures.

I played plenty of games with sliver overlord you just tutor up your best slivers. But if you keep getting blown out by sweepers play stuff like Basal Sliver or Sliver Hivelord. Theres also Kindred Boon. Theres no reason to be getting blown out by boardwipes in slivers. But some people would rather play a deck that plays differently every game then one that has a slightly higher chance of getting the win. Also slivers are really good at rebuilding a board state especially if you use The First Sliver in the command zone

@Mortlocke - I suppose it's a matter of differing opinions. Were the deck more geared towards the pure aggro route, sure, you might be better served with other slivers in place of something like Diffusion Sliver and/or Unsettled Mariner. If your route is for combo, you being able to protect your pieces is paramount. Until they print a Hexproof granting sliver, you have things like Diffusion, Crypt, Unsettled, Crystalline, Hibernation and Hivelord. The built in tax effect or innate protection offered by the slivers mentioned extend to the rest of the board. Suddenly, your opponent has to pay well beyond what they'll ever have with X spells to target more than one of your slivers. Suddenly they have to devote their entire turn to taking one of your pieces out instead of advancing their boardstate at the same time. That's not even to mention other options like Heroic Intervention that can add additional protection to your strategy.

If your intent is to combo off and win by turn 4-6 under ideal circumstances, only super solid starts with fast mana will even let your opponents get to the point of being able to pay for the tax.

Additionally, each of them, being a sliver, counts for combo related pieces like Mana Echoes, Intruder Alarm, etc. Tax effects can warp games - suddenly something like a Rhystic Study or Blind Obedience suddenly makes opponent's play more awkward and forces them to play around it. Unsettled Mariner suddenly forces additional resources to be spent on forced discard, sacrifice or burn effects targeting you, nevermind spot removal for your board.

You're not always going to have Sliver Hivelord or Crystalline Sliver out, and you need to be able to make sure that you can make it to where you get them on board. I would argue that a single counter spell in hand vs a table of 3+ opponents with potential spot removal isn't going to pan out any better than taxing them 2 with something like Diffusion Sliver in the early game.

Wicker - with Crystalline Sliver out on the field there is no getting around shroud. Instead, what I opt to do is change strategy. The next sliver i'd want on the battlefield is Sliver Hivelord. I would shift to a more "swing wide" strategy. I would try and get some effective evasion, and ultimately get Sliver Legion out. Your work around is pretty clever though. I like it.

As for what to swap out for Unnatural Selection? Interaction. Assassin's Trophy, Abrupt Decay, Path of Exile, the list goes on. Really, it depends on what you want in the deck.