As Conspiracy enters the battlefield, choose a creature type.

Creature cards you own that aren't in play, creature spells you control, and creatures you control are the chosen type. 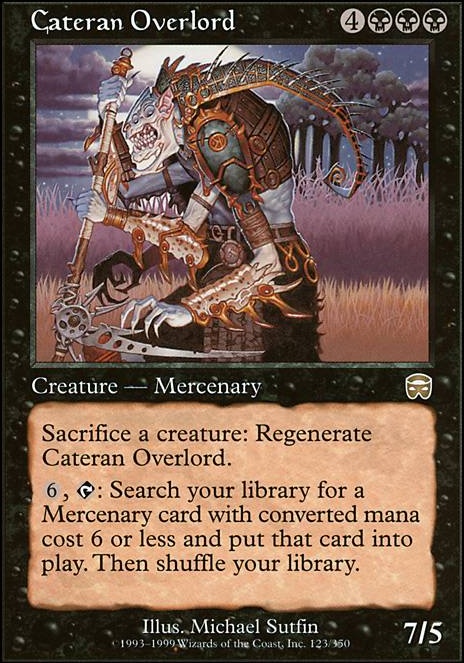 There is actually lol- the card is Conspiracy.

That sort of thing is a nice idea for a bit of tech. I personally don't feel I need it with 28 potential triggers for Taborax, but its a really good potential choice for those who wish to build this list as well or their own lists.

Spiders really don't have a stand out card so its hard to make a purely tribal deck with them. If I had to pick a single card to add maybe i'd go with Vigor?

Many cards can put out multiple Insects however. If you could fill the field with insects then pop out Conspiracy suddenly your boss could cause real damage. Still kinda on theme. Saber Ants and other cards do the same thing (a morph and one with defender if i remember correctly).

To add to that. If Ashes of the Fallen and/or Conspiracy ever found a home in this deck, Enlightened Tutor, or anything of the sort, may also be good. You could grab one of these if needed, but otherwise it fits your theme being able to fetch equipment.

Luminous Broodmoth might be a good include. Has decent value on it's own, but goes infinite with Colossus Hammer.

To be fair though, has no synergy with the knights theme. Also being the only non Knight might not be worth the inclusion of Ashes of the Fallen or Conspiracy. Although if you found enough non knight cards that really do deserve a spot in the deck it may be a nice package. Stoneforge Mystic Comes to mind.

Just a fun idea even thought it might not be worth the include.

Edit: Just read the last part of your descryption. QQ

So, story time for amplify; Legions had just come out, and with it, slivers were reborn. There were also, as it turns out, some beastly monstrocities for removal, like the aforementioned Feral Throwback's provoke.

"But wait," I hear you cry, "what do these two completely different tribes have to do with each other?" Well, first I need to provide a bit of context; you see, while the card itself might reference a specific creature type, the mechanic doesn't. It checks creatures that share a type as the creature enters play. It's a small distinction, but it allowed a weird interaction:

Mind you, nowadays we have Hivestone, Arcane Adaptation, and Xenograft, but this was old school. Heck, magic was just celebrating its 10th anniversary. And there's nothing I like more that taking old cards that were basically useless, cheap gimmicks, and turning them into disgusting beasts. besides which, with the new slivers, it was possible to cover most bases with a mere two colors in slivers. This was basically unheard of a the time.