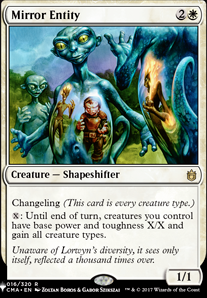 : Until end of turn, creatures you control have base power and toughness X/X and gain all creature types.

First of all you want some untappers like Seedborn Muse or Samut, Voice of Dissent to make more than 1 token each turn. Then some sac outlets like Goblin Bombardment and Ashnod's Altar to sacrifice you tokens whenever you want to get your dinos on the field and do dmg or get mana. If you add an eldrazi Titan to reshuffle your grave and 3 more cards you get the said infinite combos.

I saw a game once where an Atla Palani, Nest Tender

deck won on like turn three from using a Mutagenic Growth on Atla and then activating Mirror Entity for 0 an arbitrary number of times cycling through their deck getting infinite ETB triggers on Purphoros, God of the Forge. They had the legal Shuffle Eldrazi in there to keep shuffle the graveyard back in. It was fun to watch but probably wouldn't be consistent enough.

Peoni: Thank you so much for the super detailed and thoughtful comment!!!!!!

When I started putting it together I had cards like Firebrand Archer, Electrostatic Field and Guttersnipe together with Purphoros, God of the Forge and Impact Tremors but then I realized that 1- maybe dealing a lot of non game-ending damage to "each opponent" in a format that seems very political and painting a huge target on my head is not such a great idea and 2- that Purphoros costs a whole lot of money, haha. So I got rid of them, but totally want to add Purphoros in the future as it's just an amazing card.

Isochron Scepter seems amazing here as well! The double masters printing has apparently made it relatively cheap overseas, but for some dumb reason it's still super expensive locally so I don't know if I can afford to add it. But I'll write it down on the maybeboard and definitely add it and all its other combo pieces once I can!

As for rocks, that's some good advice! Shame about Chromatic Lantern, it's a more expensive card I actually own and was excited to actually use it, hahaha. I also have the Bauble, so I'll be sure to add it in!

Agreed on the counters, definitely gonna make that change! Had some of those in earlier but ended up cutting them, though in hindsight they're the ones that should've stayed. I can probably add in spot removal as well (got a Path to Exile lying around as well lol), just gotta figure out what to take out for them!

I'll make those changes tomorrow as it's really late right now, but again, thank you so much for taking the time to comment! These suggestions were incredibly helpful. Building for a format you've never played and without knowing what to expect from other players or from your own deck is tough, hehe.

Also gonna try to look more into infinite combos with Kykar tomorrow, see if I can find other decks that have more of them that I can use!

PS: Definitely gonna add Bishop of Wings and Arcane Adaptation too! And thought it requires an additional mana to get it going, the bishop should also work with Mirror Entity, which makes me happy haha. Mirror Entity is great!

Coward_Token, you have a point. I have forgotten to look at the shapeshifters for this deck.

Mirror Entity and Unsettled Mariner are good additions in this deck, and will replace Aurora Champion and Banisher Priest.

Mirror Entity and/or Unsettled Mariner? They're good on their own merits and help you fill up your party