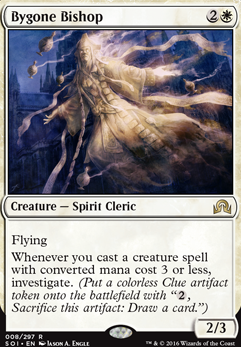 Whenever you cast a creature spell with converted mana cost 3 or less, investigate. (Put a colourless Clue artifact token onto the battlefield with ", Sacrifice this artifact: Draw a card.")

Bygone Bishop occurrence in decks from the last year

MindAblaze on Why White? Design Choices

I think subtle choices that donât break the color pie would be the best direction for white and for the game.

Of course we want stuff for EDH, however we need to remember there are more formats impacted by this and if every color does the same things what is the point of the color pie at all? I like some of the examples given so far, like Bygone Bishop and Mentor of the Meek for weenies, Dawn of Hope for life gain, Puresteel, Sram and Spiritdancer for voltron and then Mesa Enchantress et al. (Which is really a GW strategy.)

Having generic good stuff isnât really something thatâs healthy for the game I think. There has got to be something thatâs not generic, but still easy enough to use for what white wants to do. Like Feather, the Redeemed for example, or a Heroic or Exalted style trigger. Prowess is in white as well.

Pervavita on Why White? Design Choices

The question is how to give White card advantage and not break the color pie or over due it.

To not over due it that is easy, you start slow and add a card here and there (one per set/every other set) and make them not make them strong effects that risk breaking. I think as of now WOTC has been doing this with cards like Dawn of Hope in the last few years. They have also missed with Happily Ever After.

Now how to make the card advantage feel White? Well look at what White does already and lean into it more. Taxes are unpopular but cards like Smothering Tithe is a tax card that doesn't get hated on so this I think is one way to lean into it and give card advantage via taxes. You could like stated above even make it reward the rest of the table as White also plays on the fair play angle.

I do feel that Green gets way too much love for creatures; what I mean is Green gets cards like Beast Whisperer that rewards you for all your creature draw. I think this should have been a Green/White card and divide this ability into two separate abilities for Green and White where Green gets big creatures (Power/Toughness/CMC 4+) and White gets small creatures (Power/Toughness/CMC 2-) and both get limited at 3. This I do think still fits White as we have seen before with Mentor of the Meek and Bygone Bishop and doesn't make Green just better at creature draw. And yes make the player pay to get the card draw in White at least early on in design to make sure it's not just broken.

Mesa Enchantress , Bygone Bishop , Puresteel Paladin , Sram, Senior Edificer , Kor Spiritdancer , Sage's Reverie , Mentor of the Meek , and Dawn of Hope . All these are where white is going with card draw. And they are the strongest mono white card draw methods.

If I may, it seems that your deck lacks ways to churn through the deck, hence card draw is of the uttermost importance. As it lies, the deck only contains Mentor of the Meek , something very susceptible to a wrath. As for my recommendations, Bag of Holding , Bygone Bishop , Endless Atlas , and Seer's Sundial may be of aid.

Sun Titan is a fine card as well, Sanctum Prelate is just swell at confining, and Remorseful Cleric is fantastic utility.

Good fortune to you.