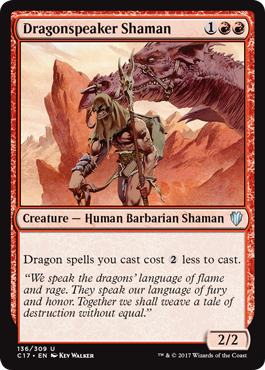 Dragonspeaker Shaman occurrence in decks from the last year

Let There Be Dragons
by rileyos

The UbeR Dragon
by Wolfenite418 Let There Be Dragons

I've been looking at building a The Ur-Dragon

deck myself and really like the deck you have.

For additional mana-fixing/ramping, you could use Dryad of the Ilysian Grove since it has a similar effect to Chromatic Lantern. Also, to make the Hoard cheaper, you could look into Urza's Incubator and Dragonlord's Servant/Dragonspeaker Shaman.

Because you mentioned you were looking for combo-y plays, Strionic Resonator could be an interesting choice for your deck because it would allow you to double the draw effect from The Ur-Dragon

or any of the other major effects your creatures will have.

I hope some of these suggestions help!

Ur dragon you die now deck(budget)

The Ur Dragon (Dragon Tribal)

Hey, after some playtest of your deck and my personal experience playing Commander I can advice you to use all the fetches and all dual lands you can get, because its otherwise very hard to cast your stuff and not brick your hand. To avoid bricking it might be a good consideration to lean heavier into 3 colors or maybe even too relying on green mostly to ramp and to manafix. This will ensure that your less likely to sit there not able to play stuff and results in more fun. Also an issue to adrees is your curve. You should have at least half of your spells be in the 0-3 cmc range and way less 6 cmc spells. Include more mana dorks to make your gameplan more consistent and less of your 6+ cmc dragons. In most cases you dont need that many anyways.

Also as for ramp you might like: Nightscape Familiar there are familiars for each colorpair and all are quite cheap.

Gl with your EDH deck and hF!