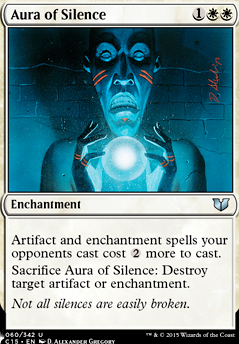 Aura of Silence occurrence in decks from the last year

The White Walkers
by milohenry13

@AllTurnsRMine: Thank you for your comment. I totally agree, you need stax to slow down your opponents. But please take a closer look at my list, I already play Winter Orb, Cursed Totem, Verity Circle and Grand Arbiter Augustin IV. Stax is good but if you have too much of it, your extra turn chain may be broken and if that's the case you should play another strategy.

If I had more slots I would immediately play more stax, but this Narset build is more proactive than disruptive. If you want to see more stax elements, then a competitive Narset stax build is probably more for you.

I have some other good stax pieces in the maybeboard which can be used to adapt to your local meta (Grafdigger's Cage, Torpor Orb, Stranglehold, Aura of Silence & Karn, the Great Creator).

I'll add Damping Matrix to the maybeboard, but personally I would rather add Torpor Orb or Aura of Silence because I already run Cursed Totem & Verity Circle.

I have been brewing Alesha in the competitive scene for over a year and playing in tournaments weekly. Here are my thoughts.

I'm down to my last couple cards to cut for my new Vadrok, Apex of Thunder deck and I'm stuck at 105 cards. It's an Artifact and Enchantment recursion deck that focuses on utilizing and reusing artifacts and Enchantments that can be sacrificed and reused for value, like Aura of Silence, Mystic Remora, Commander's Sphere, Boros Locket and Oblivion Stone.

The cards I'm looking to add are Windfall, Shadowspear, Cephalid Constable, possibly Approach of the Second Sun as a finisher, and an Enlightened Tutor if I can one day find one. I found it really helps to get a second opinion sometimes when I'm stuck like this.

The deck can be found here:

I've played Zur since Shards of Alara came out, so here are a few staples I advise: Aura of Silence: slow down opposing enchantment decks Sun Titan: bring key enchantments back from the graveyard in a way they can be attached to Zur Angel's Grace: Split Second cards are great, and this one can give you a chance to stop a combo Armageddon: once Zur is on the table, your need for lands is significantly less than your opponents' Scroll Rack: switch out bad cards and tutorable enchantments from your hand with counterspells before you shuffle Ivory Tower: Use your discards to your advantage to get an enchantment back into your deck, and get an infinite hand Daybreak Coronet: a good second Zur target that gives him vigilance Vanishing: protect Zur from Wrath effects with only two blue mana Solitary Confinement: combines with Necropotence to make you untouchable indefinitely Mistveil Plains: Put Zur targets from your graveyard back into your library Rewind: Counterspells that untap your lands for more counterspells are amazing in control decks