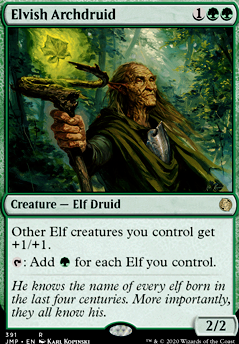 : Gain for each Elf you control.

Elvish Archdruid occurrence in decks from the last year 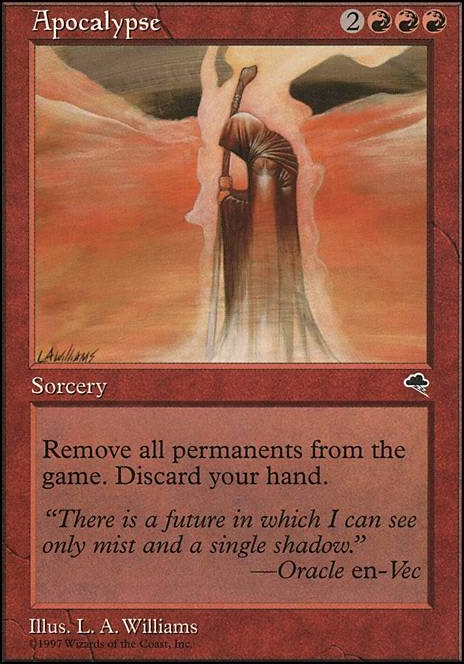 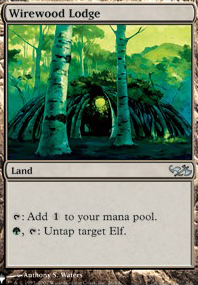 Shelf of Elf
by jundemwing 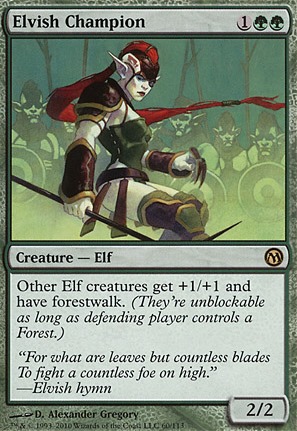 Arbor Elf is a superior mana dork to Elves of Deep Shadow as EotDS can only produce a black, which does not help us elf-ball. It's only purpose really is for mana fixing, so we can avoid Blood Moon & more reliably cast Shaman of the Pack. At the end of the day, Arbor Elf is just as effective as any other 1drop mana dork in a deck that's heavily forest based. You could make an argument for more Elvish Mystic but Arbor Elf has the luxury of untapping Overgrown Tomb or Stomping Ground if required - usually the scenario being when we elf-ball & are drawing cards at creature cast so we dont know when we may pull a Shaman of the Pack or Rhythm of the Wild.

Elvish Clancaller sounds nice but requires more mana-investment to be better than Elvish Champion which gives us evasion versus decks such as URBG, Gruul Midrange, Jund, Scapeshift, Ammy Titan, Dredge, and others. I believe the ability for us to ignore blockers vs some of the meta's best decks is better than having to pay 6 mana for 1 lord. That mana can be spent on more important things such as Beast Whisperer or Rhys the Redeemed who's 1 mana cheaper, has a cheaper ability to invest into, & an activation ability that costs the same but more impactful as going wide not only helps with more damage but synergizes with Elvish Archdruid who can produce net-positive mana after all that.

Llanowar Tribe while it has haste or coming off a Collected Company is extremely efficient. It has stats that meet the baseline for modern of being a 3/3/ for 3, with it producing mana equal to it's CMC. Meaning that with it having haste, it's basically a Burning-Tree Emissary. This mana production synergize with Ezuri, Renegade Leader, having the mana to pay for Craterhoof Behemoth without having to tap too many dorks to swing with, or pushing an elf-ball.

The Great Henge is literally a better version of Beast Whisperer as we should have 5+ power easily by the end of t3 & most definitely should on t4, making it cheaper than Beast Whisperer. With it tapping for 2G, it then pays for itself while giving us card draw on creature ETB + giving them a +1 counter. This is essential for us to elf-ball & to completely overwhelm opponents. The card draw on ETB compliments Collected Company as well where as Beast Whisperer is only on creature cast.

For those who're following the thread, Uzeep's questions were answered via Discord. However, the main thing I wanted to address in his comment is his mention of tutoring Shaman of Forgotten Ways. It is NEVER in our gameplan to tutor this, so we never care about where this card is until we've established Infinite Mana and an Outlet, only then do we look for kill loops which is also when the sky's the limit.

Due to his region certain cards were unavailable, so we also brewed up some changes to rectify this. His variation will be exactly the same with the following exceptions:

Yisan, the Wanderer Bard is right up your alley, it has a strong tutor ability that can be activated at instant speed.

You go from Wirewood Symbiote into Priest of Titania, then using that mana, each turn you (with the help of Llanowar Elves, Fyndhorn Elves, Elvish Mystic, Boreal Druid, etc.) you can win super fast, just by getting Temur Sabertooth out.

With Wirewood Symbiote, Priest of Titania, Temur Sabertooth, and a cheap elf, as well as the Priest tapping for at least 4 mana, (Elvish Archdruid, Karametra's Acolyte, etc. all work) you can make infinite mana. Toss in a card like Great Oak Guardian to make them all infinitely big and untap them infinitely, you should be able to get the win. Acidic Slime bounced infinitely is great too!

Fatboy26105 Hey you ghave to take out some of your mana dorks they are extremely weak... Well at least take out one to put in the Elvish Archdruid you will see the power it creates if you play Rhys the Redeemed

Cloudstone Curio makes one drops have infinite ETB/cast triggers when Seton, Krosan Protector is out. (need 2 one drop creatures)

Be careful when using Beast Whisperer, Glimpse of Nature, Guardian Project, and Vanquisher's Banner as you dont want to mill yourself.

Stone-Seeder Hierophant and Elvish Pioneer also work really well with Cloudstone Curio and another 1 drop creature. This gets all lands into play untapped from your hand.

Note that after drawing your deck you will have some combination of Mobilize, Vitalize, and Benefactor's Draught. Playing all of the one-drops (and other low-cost minions) can help get you the mana to start going infinte.

Use the mana and your deck

lets use our deck now.

Gilt-Leaf Archdruid is a good first option, taking your opponents lands removes most of their options

We can pump up our creatures using Leyline of Abundance, giving creatures infinite +1 +1 counters

Thorn Mammoth and Vigor remove your opponents board. If they somehow have enough toughness to still be alive, you can use one of the infinite ETB combos.

Craterhoof Behemoth is the only card we have with haste, but it shouldnt matter as they wont have lands (Gilt-Leaf Archdruid), creatures (Thorn Mammoth + Vigor), artifacts or enchantments (Acidic Slime + Temur Sabertooth)