When Kokusho, the Evening Star is put into a graveyard from play, each opponent loses 5 life. You gain life equal to the life lost this way.

Kokusho, the Evening Star occurrence in decks from the last year koKUSHo, the snappin star
by brakshow420 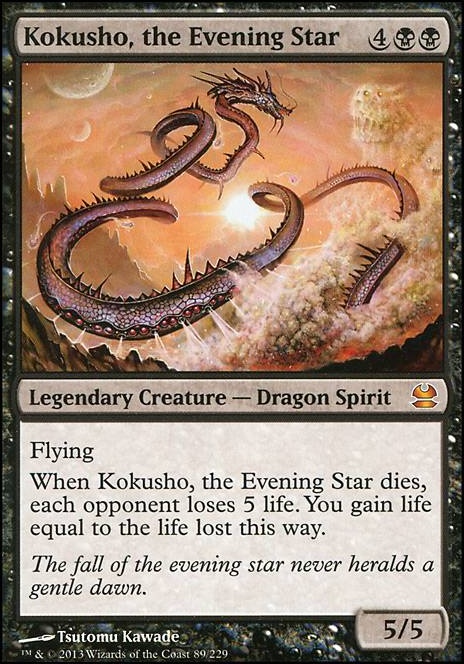 Kokusho, the eternally recurring
by Psicraft

Kokusho, the Evening Star
by luci_twiggy

I like this theme! Pawn of Ulamog would fit well. In case you would like to replace some of the more expensive cards like Kokusho, the Evening Star, cards with effects like Cliffhaven Vampire would be great in this deck as well. Check my Athreos, God of Passage deck please :)

Phyrexian Altar + Mike + Retribution of the Ancients + Any Non-Human with an ETB or death trigger equals infinite whatever. I prefer Gray Merchant of Asphodel and/or Kokusho, the Evening Star.

I don't want to be "that guy", but I guess I'm going to be. As far as I know Kokusho, the Evening Star is still banned as a Commander. If no one cares, it is what it is, but just for reference sake.

Yosei, the Morning Star, Kokusho, the Evening Star, Sadistic Hypnotist, and Ashen Rider should be included for sure.

Bastion of Remembrance is such a nice upgrade. I do run Kokusho, the Evening Star in mine and that seems like the obvious target. I could also pull out Cathars' Crusade.