Sliver creatures you control have flying.

Galerider Sliver occurrence in decks from the last year

There's a Sliver for That!
by RakdosCult 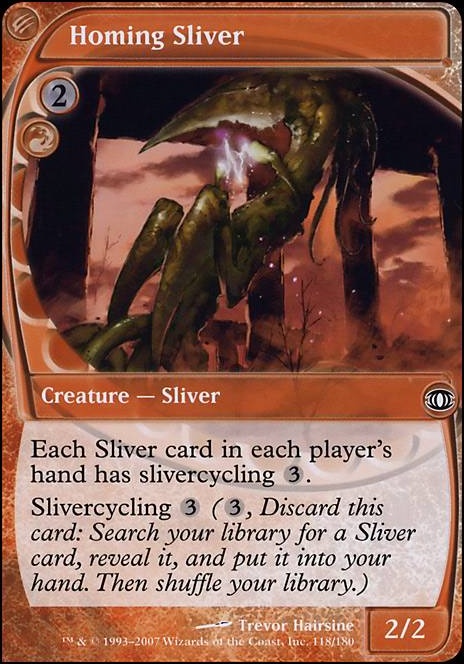 Lanzo493, thanks for the feedback! After playing with this build for a while, it did seem like most of my higher cmc cards (e.g. Karn Liberated , Kindred Discovery , Merciless Eviction ) always felt like a dead card when I drew them, when all I really wanted was more slivers. A lot of the cards you suggested definitely seem to fit the flow of the deck, I will have to try some play-testing to feel them out.

As to having The First Sliver as a commander, the main reason I stick with him is for the randomness of the cascade ability. That "luck of the draw" feature of Magic has always been an exciting part of the game for me, and makes those power-plays all the more exquisite when the draw works in your favor. Aside from that, I can say that it is a good idea to avoid too many 1 cmc cards that are not slivers if you decide to switch over to The First Sliver as a commander. This guarantees that you have an extremely high probability of cascading into Galerider Sliver almost instantly, every game. I know this kind of contradicts my first statement about randomness, but knowing how to exploit your deck is nice too :)

DragonSliver09: Like I said before, it wasn't anything close to proper testing. Nothing like it. Just me playtesting both decks against each other on this site. I realize its a faulty way to test: it doesn't take alot of variables into account, and as much as I can try and make decisions as if I didn't know each players hand some info will still bias my decisions. But it is a quick and easy way to see if your deck is viable, or whether it stands 0% chance in a meta/against a specific deck (like what i saw with slivers vs spirits, slivers felt like it had 0% chance).

I'm in no way claiming that the slivers would even be favoured against the dragon list. But I could at least see it was possible for the slivers to win. Galerider Sliver did not matter in that specific match-up, since your dragon deck doesn't get a creature down bigger than a 1/1 til turn 4-5. By those turns, slivers has played most of it's hand out, which usually involves 6-7 creatures vs the dragon decks 2-3 removal spells. Some games the dragon deck could get a dragon down before dying, in which case it was game over for the slivers. But other games the slivers were able kill by turn 5, even in the face of removal.

Again, not claiming it was proper testing, and definitely not claiming the sliver deck is better than the dragon deck. I apologize if my comments came off that way.

Drakorya: and how exactly did you do that testing? no offense, but i don't actually believe you had time to find another player and play at least 4 separate matches. at the very least, i think the dragons would have easily beat your slivers. the dragon deck has just too much removal, the creatures are way bigger, and the dragons all have flying.

even if you're lucky and get Galerider Sliver out early, it'll just be hit by a removal spell as soon as your opponent draws one. then the deck falls apart.

I actually think the sliver that makes or breaks the game is Galerider Sliver . I think I've been getting lucky in my testing and constantly getting it out turn 1-2, so I don't run into the problem of ramming my slivers into their blockers. But that's just lucky getting the Galerider down early.

I tested the deck against your decklists above, and the slivers performed well against the dragon, elf and merfolk deck. Don't get me wrong, I realize playing only a handful of games isn't anywhere near enough for proper testing, but I still want to try and make the slivers work, so I'm seeing where they work well and where they fail miserably.

Speaking of failing miserably, the slivers never stood a chance against your spirits list. I'm not even sure if sideboarding would really help. I definitely think it's the most competitive of the lists you posted. Being able to play control but also get an early clock down felt pretty powerful.

Trimmed down the decks that I'm playing and now I'm selling off what's left. Cards are NM unless otherwise noted, and I can send pictures upon request. Prices are negotiable, take the whole lot for $230

_Delta_ on Paradox and Iona: In Memoriam

My favorite time was using my Sliver Overlord deck, I got my commander out on turn 4 and then the following turn proceeded to have a Manaweft Sliver + Heart Sliver in play alongside Galerider Sliver and a Paradox Engine . From there on turn 6, I played basically every sliver ( Sliver Legion and the like of course) in my deck and to add insult to injury stole one of my two opponent's commanders, in this case The Scarab God using my commander via Unnatural Selection and they just called it game there.

Good question cerobins5. I actually think green and red is where you want to be a for an aggro slivers deck. You could try to splash blue for Galerider Sliver and some better draw spells, but the mana base is going to get pricey. Gemhide Sliver or Manaweft Sliver can help out, but it's probably not worth it for an aggro deck.

_Delta_ on Favorite Voltron Commander and why?

I play Sliver Overlord , and while voltron is not exactly my first thought at winning, it certainly is quite possible when you have a 7/7 that can gain a lot of keywords quickly when you search up Bonescythe Sliver , Shifting Sliver , Galerider Sliver , and play effects from Sliver Legion , Magma Sliver , etc.