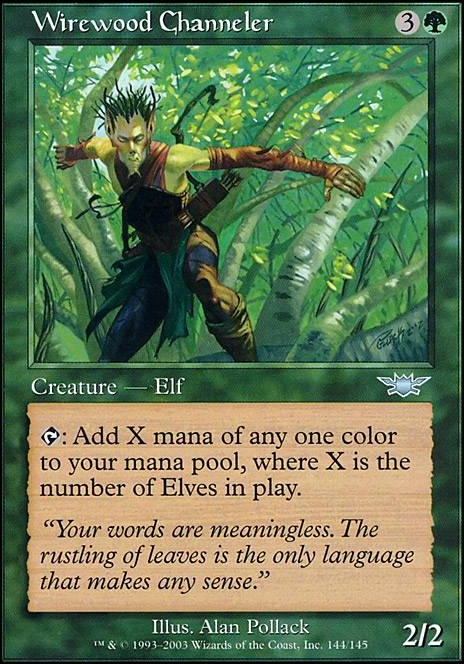 Tap: Add X mana of any one color to your mana pool, where X is the number of Elves in play.

Wirewood Channeler occurrence in decks from the last year 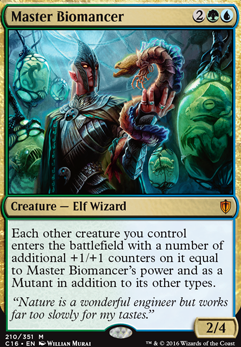 I Demand Parley With Your Constable
by VennyIsAsleep4119

Oh man I love tappy commanders. So, first off do NOT remove drs or selvala. They're both amazing utilities. Secound, I would add Leyline of Abundance it's a mana sync and it can help some of the weaker dorks go infinate. Next trim some of fat and add in more dorks/tutors/protection and enablers and better outlets.

So, things like Staff of Domination and Umbral Mantle are the bread and butter of Tao for large amounts of mana decks; though if you're using your commander you'll need a double like Mana Reflection to go off with it.

Elves of Deep Shadow - mentioned before

Lastly, slap Walking Ballista in here; assuming you're not attached to winning either hydras this little ball smacks people in the mouth like tyson if you're left unchecked.

Guess I should of given more recommendations; so you're right the mantle is dead without priest. However, there are a few cards that offer a bit of redundancy making it much more worthwhile.

Marwyn, the Nurturer *with 4+ power

Additionally, if you end up adding more of an elf package Leyline of Abundance is some epic tech that I've greatly enjoyed.

I was unaware that Dramatic Scepter had gone up that much it use to be like 5 dollars; I saw the 710-780 price tag on the deck and thought that it would be fine; but if it's not within the limitations that's understandable.

So, without the scepter the ceiling for Dramatic Reversal becomes much lower; now that there's no inevitable combo. However, I wouldn't say its actively bad. Decks like selvala and urza use cards like this in a pinch as a ritual; (not saying this is optimal but it's an applocation) though netting a positive requires you to already be relatively established on board but getting off a few extra tasigur activations in a turn could warrant some play testing at least.

Typically, Seasons Past is played in conjunction with cards like Wilderness Reclamation and Seedborn Muse to be able to interact on the following turns after recurring all the value. they're relatively budget right now and can definitely help in grinder games.

Lastly, Freed from the Reel is kinda a popular way to net infinite mana in pauper edh with Arbor Elf and Wild Growth on an island. Though almost any land enchantment could be used too for redundancy like Utopia Sprawl.