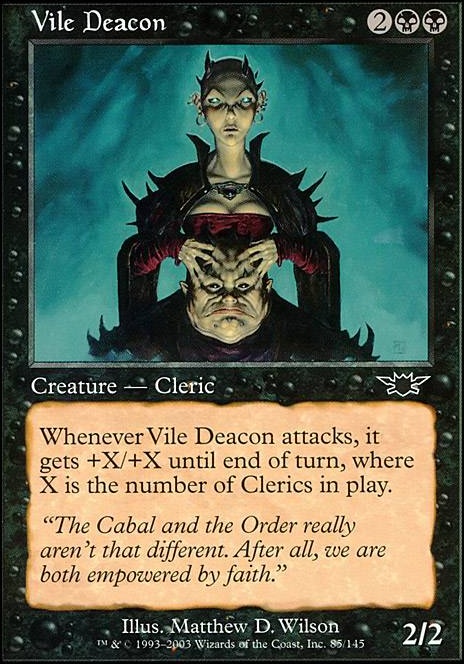 Whenever Vile Deacon attacks, it gets +X/+X until end of turn, where X is the number of Clerics on the battlefield.

Clergy of the Vast
by Stardragon 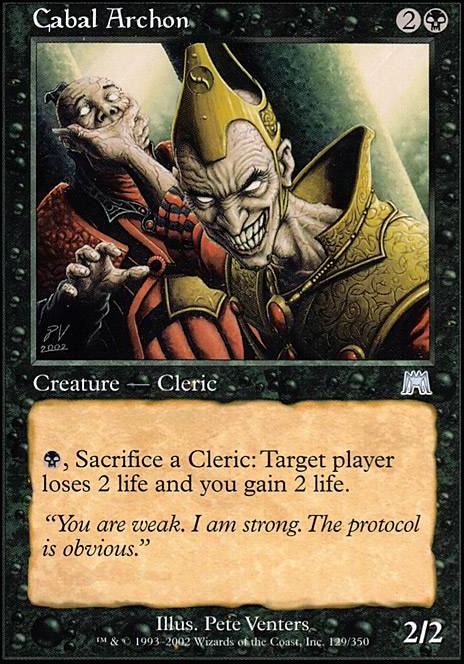 what about Mighty Leap or something along those lines for pre-blocking-step-shenanigans with Vile Deacon? maybe Gods Willing instead?

Honestly my first cuts would be Vile Deacon or Ancestor's Prophet. The first is just a (potential) big body and the second is over costed for what it does (and requires a lot of extra clerics to work). Another card you may want to consider is Transcendent Master - with enough pumping he can get very powerful and it is cheaper to cast initially. The only problem is it requires 15 total Mana to get to full power...

Hey there! First off, props on making a somewhat tribal cleric deck. I love this creature type for some reason, and one of my first good decks was a b/w cleric deck (legacy purely for the cardpool, not for competitiveness) so I can definitely give some guidance. You already have Battletide Alchemist, so you need more clerics to pump up her ability to prevent all damage! Doubtless One gets bigger as you cast more clerics and has life link. Vile Deacon gets pumped up when you attack. I like to attack with him, and then sac him to starlit sanctum for double damage. Also Order of Whiteclay and Oversold Cemetery for more recursion. Also, Rotlung Reanimator could be a beast in this deck and pump out a ton of tokens.

Also, I know somebody mentioned Sanguine Bond already, and that paired with Exquisite Blood will trigger an instant win if they are both on the board and you manage to gain 1 life or ping an opponent for 1. I run those in an Oloro deck and it is great. You may also want to consider Sensei's Divining Top, Enlightened Tutor, Idyllic Tutor, Plea for Guidance, Demonic Tutor, to get some of your engines online since you don't have much card draw. That is all I can think up right now. Cool deck!