âJoin me or die... Or join me after you are dead, that's fine too!â 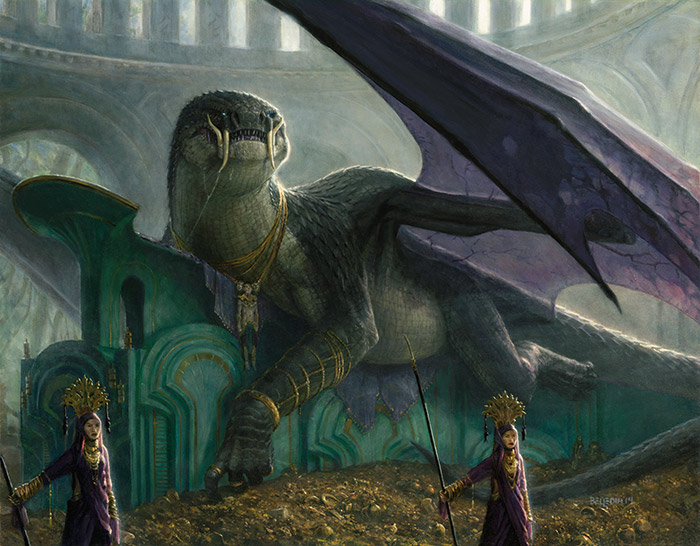 Looking back at my other decks as well as my unused cards, I noticed that I had no deck with the Dimir color pairing yet. Later, I got inspired by other Silumgar decks for their flexibility and interactive strategy. Also, how cool is it to have an actual Elder Dragon at the helm of one of your EDH decks?

I decided to try out my own take on the opulent dragon and this is the current version. Feel free to leave a comment if you think this deck would be better with the addition of certain cards!

Just stealing anything at will might not be the best tactic though. Being the steal deck at the table, you have a lot of avenues for politics. You can avoid confrontations or forge alliances at pivotal times when holding a steal spell. âNot meâ can be a reason for opponents to actively seek your alliance as well.

The deck can win Mcguyver style by tinkering together a combo from cards our opponents provide or just by swinging with their big beaters. If that doesnât work, the deckâs life drain spells such as Gray Merchant of Asphodel provide a backup plan to close out the game, stealing the last remaining life from our opponents.

Whatever it is we steal, we want to make sure we have our defenses up; people tend not to like you much when you keep stealing their precious stuff. To that end I included some rattlesnakes and pillowfort cards, like Propaganda and No Mercy (Of course I could not pass up on Nils Hamm's wonderful Baleful Strix in my Dimir deck).

I also added a small counter/control package leaning towards redirection. Silumgar can draw out some hate, specifically single target removal: owners like to get their stolen precious back. I want to make use of this dynamic by incorporating effects that can redirect these spells, like Misdirection, also stealing my opponents removal for additional saltiness.

Another form of defense can be found in the land package. I'm running quite a few lands that can deal with Homeward Path so we can make sure that it does not stay in play for long.

A large part of the steal spells look for opponents graveyards for their targets. But what if there is nothing there that we want to steal? In my playgroup, everyone is playing some form of graveyard hate, so I need to help them a bit in filling or refilling their graveyard. Wheel effects like Windfall really help in this while doubling as proper draw spells.

Another way to increase our options is to make untargetable creatures targetable with Arcane Lighthouse and Detection Tower.

This deck is designed to scale well with the strength of the group. Its intent is to be fun to play and to be fun to play against in groups of different power levels. In that sense I am very happy with this deck. I can always bring it out and not cause any big feel-bads.

I like the idea that I can take out this deck in any situation. It's an easy pick to play first in a new setting due to the scaling. I also like it that this deck will hardly ever play out the same way twice, making it fun to play on the long term.

Thanks for stopping by. Feel free to leave a comment or to upvote the deck if you liked it!

The Return of Wrexial has no way to win!