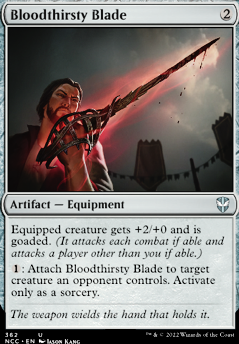 Equipped creature gets +2/+0 and is goaded. (It attacks each combat if able and attacks a player other than you if able.)

: Attach this to target creature an opponent controls. Activate this ability only at any time you could cast a sorcery. 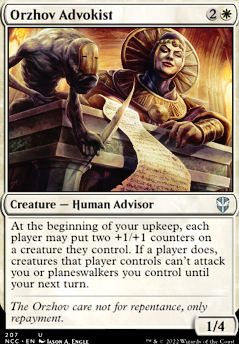 701.38a Certain spells and abilities can goad a creature. Until the next turn of the controller of that spell or ability, that creature is goaded.

701.38b Goaded is a designation a permanent can have. A goaded creature attacks each combat if able and attacks a player other than the controller of the permanent, spell, or ability that caused it to be goaded if able. Goaded is neither an ability nor part of the permanentâs copiable values.

Hi all , so Bloodthirsty Blade says "and is goaded" when does this happen? the goad i mean, as soon as the creature gets attached with this? the important question: does this mean that i can attach , goad, and if i want to...attach to another creature to goad that one also? can i attach=goad multiple creatures by re attachin this to each one of them in my turn??

Gift of Doom, Cauldron of Souls, Tetzimoc, Primal Death and Bloodthirsty Blade are propably the best cards you could possibly play in Horobi.

Black has enough wincons. Considering Horobi's ability, doing something spell based or ETB-based seems correct. So Torment of Hailfire and/or Gray Merchant of Asphodel. Another great card that can be both wincon and ramp is Revel in Riches.

What do you think of this as a start? I'll admit lines 3 & 4 may be controversial, but as someone just trying to make people laugh, I think it might work.

She keeps her Bloodthirsty Blade next
To her pretty Gorgon's Head
"Let's go Brandon," because
Monarchs don't like presidents
A built-around archenemy
For Atraxa and Arcades
At any time
A combat phase you can't decline
Deathtouch and assassins
Well-versed in rhetoric
Upon her Throne of Empires

The main thing I'm noticing is the sheer amount of 4 drops you have. This slot competes with your commander and none of those cards will help you establish a boardstate before your commander hits the field. Drop several of your 4 drops for 1, 2, and 3 drops and you'll notice a significant increase in competitiveness. Also, with your commander being a 4 drop, 3+ drop mana ramp like Kodama's Reach, Cultivate, Gilded Lotus, etc. aren't nearly as helpful. Stick to 2 drop ramp cards to actually ramp your commander out a turn earlier.

I hope I'm not being too presumptuous but I'm going to suggest cuts as well as additions to help you out. I'll try to keep things budget friendly in the $5ish and under range (with a few exceptions you should try to trade for).

Adds: 2 to 3 lands (2 if you get the avg. cmc of the deck below 3.2) Three Visits and Nature's Lore, Bloodthirsty Blade, Loyal Apprentice, Sakura-Tribe Elder, Path to Exile and Swords to Plowshares, Spirit Mantle , Beast Within and Generous Gift, Mother of Runes, Toski, Bearer of Secrets and Ohran Frostfang, Orzhov Advokist, Spirit en-Dal, Boros Charm, Bedlam, Luminous Broodmoth Selesnya Signet/Boros Signet/Gruul Signet/Talisman of Unity/Talisman of Impulse/Talisman of Conviction if you insist on more ramp.

Cuts: Apex Devastator - Cute but doesn't fit the theme and costs a ton.

Grand Warlord Radha - As a 4 drop, you're not accelerating into much.

Llanowar Tribe - 3 green mana is tough to hit on turn 3 and it's not actually accelerating your gameplan as a 3 drop.

Mina and Denn - Good card but not better than other 4 drops here.

Yasharn, Implacable Earth - Worth keeping ONLY if the can't pay life or sac nonlands is relevant in your meta.

Brave the Sands - You shouldn't worry about vigilance or blocking with goad being the main theme.

Gilded Lotus/Nyx Lotus/Sisay's Ring/Thran Dynamo- You're not ramping into fatties or anything like that here.

Feel free to check out my list for ideas. Upvotes on any of my decks are appreciated Marisi the Pimp - (Combat) Trickin' Hoes