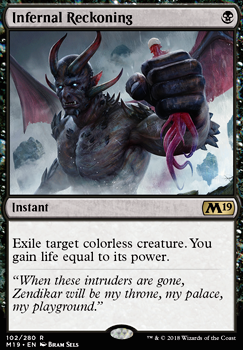 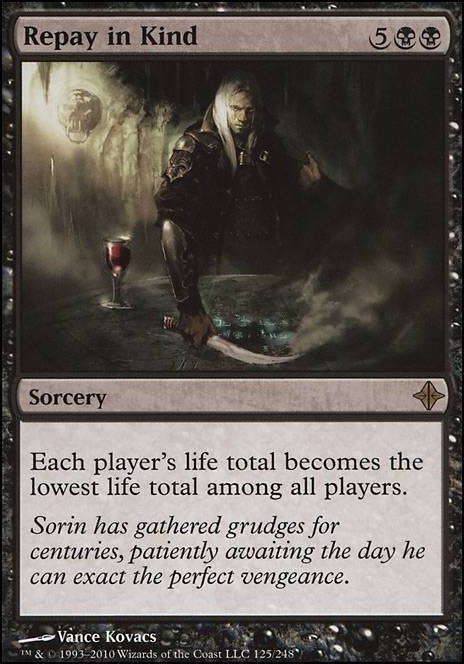 A Sinister Risk
by Giriel

Tzefick on Wither to Dust

Black doesn't get exile this cheap, even with downside. If you would give it to them, the color would take over some of White's main strengths. The downside is mostly negligible based on the format.

In Commander you have 40 life to take from, so if the opponent gets to achieve a high power creature where this is your only removal choice, you're in trouble. But in 99% of cases, it just costs you a small amount of life, which black happily does in so many other aspects of the color.

In Standard you'll only target stuff that doesn't cost you too much - but the alternative is often to take the combat damage to the face. If the meta is dominated by big power creatures, you run destroy removal, and possibly this as SB if WotC decides to make a stronger Bronzehide Lion.

In Eternal formats you SB it against creatures where the cost is negligible or where it disrupts your opponent's combo.

Also... Tragic Slip exists and that is how Black usually does removal that bypass indestructible, but it is conditional when it's this cheap.

Black is usually tied at 4 CMC for unconditional exile removal, as seen in Eat to Extinction, Gild, Deadly Rollick. The last one having a conditional situation where it's free, specifically for Commander.

Black does get lower CMC exile, but they are conditional on the target: Epic Downfall Legion's End or Grotesque Demise. Or Infernal Reckoning.

White is and should be the king of cheap flexible exile, or it loses one of its few strengths.

Did you ask for cards?

Therefore i would play 4x Thoughtseize and 4x Fatal Push. Then you need Mass Removal. 2x Bontu's Last Reckoning is a cheap Board clear with light burden. 2x Murderous Rider.

Then to push your Hailfire i would play 2x to 3x Cabal Stronghold. For Fatal Push to trigger i would play Fabled Passage. 2x Field of Ruin to deal with annoying Lands, like Azcanta or something else.

afaik colorless only mattered for the eldrazi though? although Infernal Reckoning and Ulamog's Crusher seem to imply that some remain, so maybe they'll be a subtheme at least

I would play Anger of the Gods only in Sideboard.

As for that Wurmcoil Engine --> Infernal Reckoning

GoldenAgeBatman on Sideboarding Against Tron

Does anyone have any suggestions for sideboarding against tron builds?