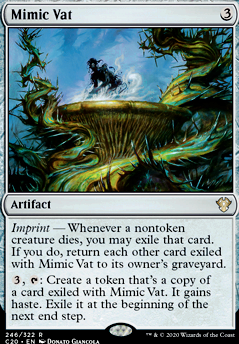 Imprint â Whenever a nontoken creature is put into a graveyard from the battlefield, you may exile that card. If you do return each other card exiled with Mimic Vat to its owner's graveyard.

, : Create a token that's a copy of the exiled card. It gains haste. Exile it at the beginning of the next end step.

Roll for Replication
by SpaghettiKnife

Cool build- a buddy of mine ran this for a while with all the mana doublers he could jam in mono-u. Fast mana into Eldrazi hurts...

Best thing to do imo: run more lands and ramp to match your curve. You want to cast Braids on turn 3 every game (so run lots of 2 drop rocks) and then have lots of mana if she gets hated out.

Your fatties are pretty ruthless so I wouldn't run anything that is slow or conditional like Keiga or Arcanis. Assume none of your creatures will live unless you protect them... run things like Not of This World or Mimic Vat .

Tormod's Coming Back with Bruse Tarl