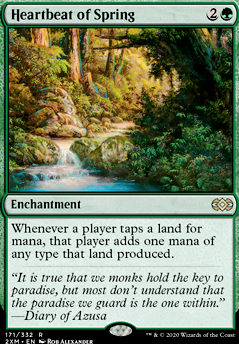 Cool deck! I just am wondering if maybe Serum Visions would be better than Otherworldly Gaze(I know it's instant speed but still). Also, I feel like Temporal Mastery is such a powerful card and is worth considering especially considering that your're running Dictate of Kruphix (same goes for Terminus but I get that you have it in your sideboard). Lastly, 3 Ephemerate seem a bit excessive if you're running only 5 creatures you would want to bounce (or am I missing something?) and I would play maybe Brainstone, which lets you manipulate the top of your deck tremendously.

Font of Mythos, Dictate of Kruphix, and Fascination could be potential draw options as well.

DemonDragonJ on Well of Ideas or Walking â¦

I have Well of Ideas in my group hug EDH deck, but I am contemplating replacing it with Walking Archive , so I wish to ask for advice from the others users here before I make a decision.

I shall compare the cards, below, listing their advantages and disadvantages.

+controller receives the benefit before their opponents do, and receives a greater benefit

-has a higher mana cost

+has a lower mana cost

+provides a creature for blocking

+is a mana sink, and can potentially draw a significant number cards over the course of the game

-opponents shall receive the benefit before the controller, and all players receive the same benefit

What does everyone else say about this? Which card should I use in my deck?

Alternatively, I could replace Dictate of Kruphix with Walking Archive , although the flash mechanic on the dictate is very appealing. What does everyone say about that idea?

Oh my... Thank you so much Ravenrose, this means a lot coming from you.
I absolutely loved your deckbuilding style and your thematic choices, so I'm really glad you appreciated this page. Your passion for mythologies and legends it's really inspired and inspiring, that's exactly the kind of magic I like to witness.
I'm looking forward to see more of your creations in the future!

As for the Dictate of Kruphix , i considered it for the oldest versions of the deck but it never made the cut because I always found its symmetry to be, well, too asymmetrical (I basically play multiplayer only).
Oh well, never say never!
Thank you again for stopping by, may your gods always look upon you favorably!

My gods, you put presentations to shame! I have never seen such an amazing set up; the fact you include quotations and the stories of your deck is absolutely astounding - I haven't seen a deck list like this in a long while. Kruphix is one of the few gods I want to build because I love his versatility and the options you have at your disposal since Kruphix is the God of Mysteries. I am a real High Priestess but I feel like I have just met a High Priest of Kruphix!

I do have a minor suggestion for the deck - and this is only because I love my theme cards - and that is Dictate of Kruphix .

I am blown away by your dedication to your deck and to this page.