When this enters the battlefield, look at the top four cards of target opponent's library, exile one of them face down, then put the rest on the bottom of that library in a random order. For as long as that card remains exiled, you may look at it, you may cast it, and your may spend mana as though it were mana of any type to cast it. 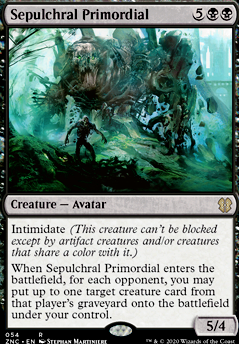 Blacker then the Blackest Black times Infinity
by hotkarl63 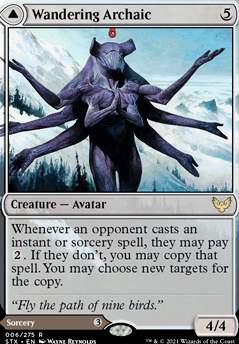 all your deck are belong to us (Gonti EDH)
by iammute

It's only fun when there's some blood involved
by DreadD3mon

So, the fun thing about Vela is that she doesnt require anything to die to get the ping damage. So a combo for it would be Deadeye Navigator + Peregrine Drake. Target Drake with Navigators ability and you can continuously untap lands, tap all your lands, use two mana to activate the Navigators ability on Drake and eventually get infinite mana. That is nice, but what you care about with Vela is the fact that in order to generate infinite mana, you have to blink Drake infinite times. Everytime you do that with vela on the battlefield each opponent will lose one life, so you kill your opponents without ever needing to do anything else. There are many combos like that bounce/blink creatures on your battlefield. Many groups don't like infinite combo though, so you should discuss this with them before you include it to avoid the feel bads. One card that goes really well with Vela by itself is Rite of Replication if you kick it, it translates into 30 damage instantly to each opponent. Rite kicked targeting Vela will make 5 copies of Vela in addition to the original. All 5 will immediately need to be sacrificed due to the legendary rule not allowing you to have multiple copies of any legendary creature. 6 copies of Vela seeing 5 other copies of itself leaving means 30 damage gets assigned to each opponent. It is very mana intensive since the kicker is so expensive. Deadeye Navigator is really excellent because you can blink anything on your board for 2 mana. You can use it targeting Vela to save her from removal, or you could target itself and when it re-entered the battlefield you could choose a new creature to target with his soulbond ability. Anything with an "enters the battlefield" effect such as Mulldrifter, Baleful Strix, Gonti, Lord of Luxury, and Gary (Gray Merchant of Asphodel) you can repeatedly activate with Navigator by paying two mana, and you can always swap targets as well. Sorry for the novel. :p Let me know if you have and questions about anything i said. I am not the best at explaining myself, but i will do better if i need to. Haha.

Nitpicking feedback: Gonti, Lord of Luxury doesn't seem worth it without a flicker source, unless your meta is heavy on topdeck tutors (yes, I see Scheming Symmetry ). It's pretty much an unexciting body with Shimmer of Possibility attached except usually worse because stolen cards, on average, synergize worse with your deck than your own cards. I'm more okay with your other card stealers as they're all some combination of being cheaper, more reliable, reusable, and stealing trough some form of control.

Cool deck!!
Control Magic and Blatant Thievery come to mind, as does Sepulchral Primordial .
With Chamber of Manipulation you can repeatedly steal commanders and then sac to mr. Szat.
Expropriate is good but high cmc.
Reins of Power is good too.
Also Gonti, Lord of Luxury seems on-theme.
Cheers and im sure there are more ideas out there but these are just a couple. Have fun!