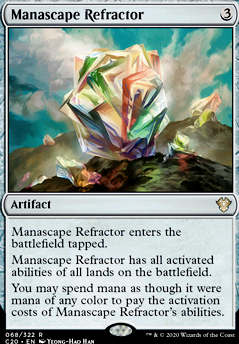 Manascape Refractor has all activated abilities of all lands on the battlefield.

You may spend mana as though it were mana of any colour to pay the activation costs of Manascape Refractor's abilities.

I have been toying around with this deck idea and I have some suggestions now!

Lotus Vale and Lotus Field are invaluable with Hokori

I would drop howling mine for Endless Atlas, other card draw are War Room, Alms Collector, Esper Sentinel, Mangara, the Diplomat, I have been having a lot of games where the deck just grinded to a halt without something to refill it. Symmetrical card draw can work against you here so Howling Mine May not be good unless you have plenty of ways of tapping artifacts down.

Archon of Emeria is super good, a better eidolon or can be run in addition

Sanctum Prelate to stop any annoying board wipes.

Solemnity isn't really needed unless you plan on playing Phyrexian Unlife as well.

This is what I have been working on using yours a blueprint: No One Wants to Play EDH With Me Now...

Alright, here's a crazy one: