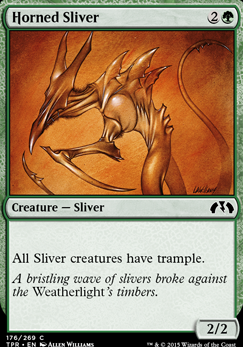 All Sliver creatures have trample.

Army of Klendathu
by Swagkage

Bonescythe Sliver over Horned Sliver for sure. Also, Nature's Claim or Abrupt Decay over Krosan Grip, and I'd just give Triumph of the Hordes a try.

Looks like a great deck, we haven't updated ours with the Modern Horizons stuff yet. Might I suggest cutting Horned Sliver Coat of Arms and Crop Rotation for Crystalline Sliver Slate of Ancestry and Skullclamp ?

PlatinumOne on New player looking for a â¦

Sliver Overlord then tutor up Venom Sliver and Horned Sliver . slivers have a lot of power buffing creatures like Sinew Sliver and Predatory Sliver to help ramp up that trample damage. you also get Striking Sliver , which is really good with deathtouch. a 1/1 with first strike/deathtouch can safely block and kill a vanilla 10/10, for example.