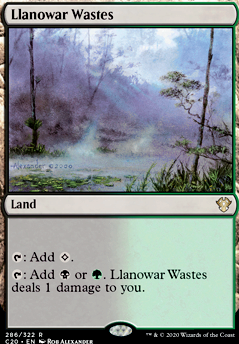 : Gain or . Llanowar Wastes deals 1 damage to you.

Hey there! One way to strengthen and upgrade your deck is through your mana base! Maybe consider some of the following lands!

If this helps be sure to check out some of my decks, (Double Trouble EDH *PRIMER*), give me suggestions if you have and support it if you like it- I'd appreciate it! Anyways though, good luck on your deck, hope this helps, and have a great day! Happy tapping!!!

What Pink Floyd and Dale Earnhardt have in common

G'day mate! Your mana base is indeed good, but I have a couple of suggestions you may find to your liking! Lets start off looking at your lands. I notice you have the shock lands, and true duals, which are pretty much some of the best so nice job there, as well as the check lands. There are a couple I would recommend however, that can be extremely helpful.

Fetch lands! Verdant Catacombs, Windswept Heath, Marsh Flats. These guys can search for the shock lands like Overgrown Tomb, giving you pretty much whatever color you need at the given moment which is super useful.

Filter lands! Take one color and poof it gives you a different color in a couple of combinations!Twilight Mire, Wooded Bastion, Fetid Heath.

Horizon lands and pain lands! These are some of my favorite, since they aren't conditional, like the check lands: which only can give you mana and come in untapped if you meet the requirement. These guys you can always rely on for mana, even at the cost. Nurturing Peatland, Horizon Canopy, Silent Clearing, Llanowar Wastes, Brushland, Caves of Koilos.

Fast lands! Those first few turns it can be nice to have untapped lands, right? Maybe use these! Blooming Marsh, Razorverge Thicket, Concealed Courtyard!

There is also a long list of multi lands that function very well- even better than some of the ones I just mentioned! Here are some of them you might like

In the end if any of this helps be sure to check out some of my decks, like Double Trouble EDH and A Deal With the Devil EDH, which I recently updated both of which with CSS and huge descriptions! Anyways though, hope this helps, good luck on your deck, and have a great day! Happy tapping!

Hey, Evolutionary Escalation is an underrated card for counter strategies. Escalation goes well Atraxa's vigilance. With Escalation she will rarely not be the biggest creature on the battlefield attacking and defending. Sage of Hours is a powerful creature with counter strategies and with Escalation as well as Forgotten Ancient and The Ozolith. Sage combos with Ezuri, Claw of Progress with five experience counters for infinite turns.

I think you can afford to cut some basic Forests and Islands for dual lands that can ETB untapped: Command Tower, City of Brass, Llanowar Wastes, Yavimaya Coast, Brushland, Twilight Mire, Flooded Grove, Wooded Bastion. Nature's Lore, Wood Elves and Farseek are upgrades for Cultivate since you have Triome and Shock lands.