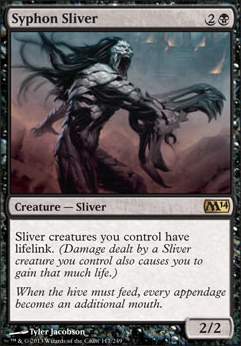 Doombeard1984 Thanks for sharing your deck! Although I've been collecting slivers for a long time, I'm still learning about how to use them in EDH. (I'm happy you also visited my deck, thanks!)

Loved your Intruder Alarm inclussion, I think I should try it in my deck!

By the way, what do you think about this packcage?:

-> Morophon, the Boundless + Hibernation Sliver + The First Sliver (wich you already play). I have this combination in my deck not as a real infinite combo but as another finisher sinergy: With Morophon, the Boundless you can play The First Sliver free, getting cascade, and returning it to your hand with Hibernation Sliver by paying life. You'll get a <4CMC cascade trigger every time you repeat this by payign 2 life, but playing a big part of your deck, probably reaching Lavabelly Sliver and Syphon Sliver , obtaining an infinite way of gaining 2 life to infinitely bounce an sliver and play it free with Morophon until your opponents die with the Lavabelly damage. Reaching Intruder Alarm and Mana Echoes I supose it also could reach an infinite mana path too. I know there are better combos using The Queen, I just play this one as a diferent one and taking advantage I personally play The First Sliver as commander.

I would throw in Sliver Queen, Coat of Arms, Belligerent Sliver, Bonescythe Sliver,Lavabelly Sliver, Sliver Hivelord, Sliver Legion, Sliver Overlord, and Syphon Sliver. I would remove a lot of the slivers that give other slivers an ability that costs 2 mana to activate.

This deck is not as good as it could be.

To fix your deck you need to add more slivers like

Make sure the land base has

Caerwyn, I have a counter to some of your cut recommendations: