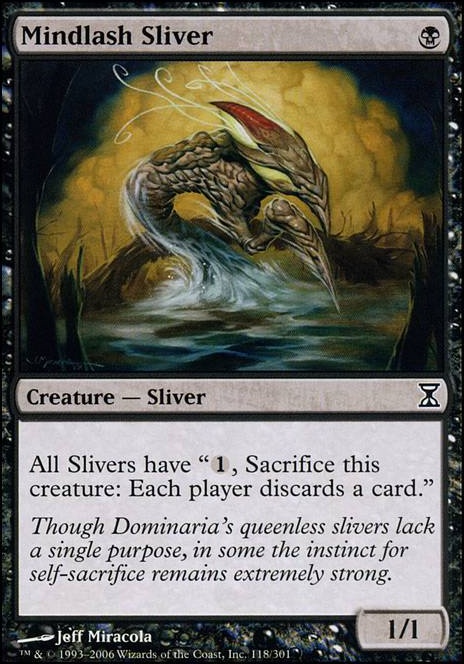 All Slivers have "(1), Sacrifice this permanent: Each player discards a card." 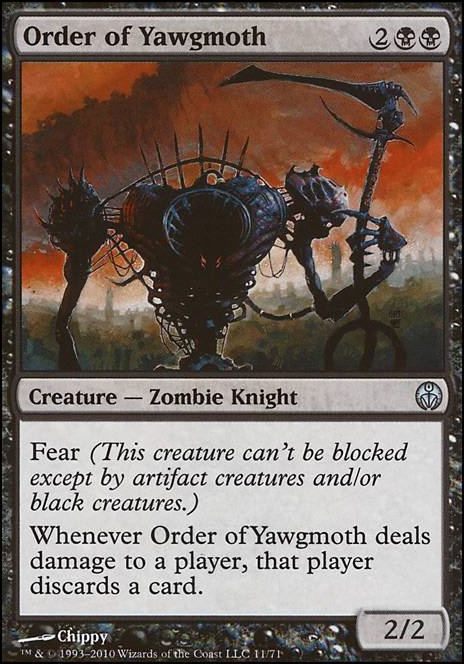 drunksementhrowr We can discuss the deck here, or you're free to post on my profile!

The combo pieces have definitely seen some adjustments. The biggest change is the removal of Laboratory Maniac . Labman was high in CMC, and has no value outside the combo turn. Effectively, Labman is a complete dead draw if we aren't winning. This does mean that the self mill combo line has weakened, as Dread Return into labman on an empty library was a nice way to win. However, I think removing the labman line is correct. While it certainly can lead to wins, there are many parts during the line where you can be interrupted or have your win shut off. With our other lines, we can try another combo attempt later. The labman line is very all-in, once we have no cards in library we are either going to win the game or lose extremely soon. Labman also requires creatures in play, which we can't always guarantee, and a card that makes us draw, which we won't always have in hand.

To put it simply, it requires many deck slots, it does nothing besides win, its easy to shut off, and there is risk of a loss from doing it. I'm not saying labman is a bad combo by any means, but I think for this particular deck, adding consistency to the other combos is more important. Ad Nauseam acts as our most important win, and will let us assemble an infinite mana loop. After we have the loop, we use Lazav to copy and use Death Cultist or Bile Urchin to win. In the small amount of testing I've done on it, I like how it performs a bit better.

Some of the other cards offer support. Mindlash Sliver gives us a way to empty player hands, and protects our combo if we have infinite mana by discarding hand for everyone with Lazav. Martyr of Bones we can sacrifice for 0, which will let us mill out with infinite mana and Lazav, it also provides targeted grave hate which we can value time and again with Lazav. Martyr of Frost is a recurable effect with Lazav, which will help us with value in longer games. Unfortunately, we can't use the Martyr of Frost as a sac outlet to surveil with Lazav. Scheming Symmetry is another cheap tutor that does have a drawback, but the synergy with tutor to top to mill with surveil is strong.

The self mill lines have lost some extreme value without labman. However, we can choose to stop our self mill before we deck ourselves. Assembling the self mill combos is still strong, because we can Dread Return and copy with Lazav to recur an infinite mana combo. While our creature based combos require haste or an untap, the Orb + Alchemist combo can be used at the end step before our turn and we copy with Lazav so we can untap to combo, similar to how Ad Nauseam is played. Greaves + Cephalid has lost a lot of value though, and self milling somewhere between 30-80 cards it requires to assemble a combo in graveyard will not only make you a target but also telegraph the play. Considering removing the cephalid combo for deck space, but testing will reveal. I think the natural arc of this deck will bend towards replacing as many value cards with creatures as possible, and future printings will certainly draw our eyes.

I appreciate your interest in the deck and would love to hear about how it performs. Feel free to start an offshoot brew and replace some cards! I'm most curious to know how extra gas cards work in the build, and what you would replace for more gas. I hope this explanation helps a bit! After some more testing and brewing I will update the primer