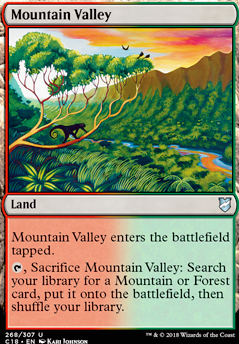 , Sacrifice Mountain Valley: Search your library for a Mountain or Forest card and put it onto the battlefield, then shuffle your library.

I think you can make some improvements in your mana rocks. The Borderposts you currently have in the deck are pretty awful compared to the likes of Fellwar Stone, Talisman of Conviction, Talisman of Impulse and Talisman of Unity. Speaking of rocks, why in the name of the Threefold Sun do you not have Sol Ring? Additionally, you could get a Chromatic Lantern in there as well. All of the previously mentioned aren't pennies, but are still quite affordable.

As for lands, I understand you don't want to break the bank BUuuuuuut have you ever looked into the Mirage Fetchlands? Specifically Mountain Valley and Grasslands are relevant to this deck. Also, there are some dual lands that fit within your budget - the Battle Lands cycle from Zendikar. From that cycle, consider Cinder Glade and Canopy Vista.

I think that's it for now, but your deck definitely could use a few upgrades to be more consistent.