Spells of the chosen type you cast cost less to cast. This effect reduces only the amount of coloured mana you pay.

Other creatures you control of the chosen type get +1/+1 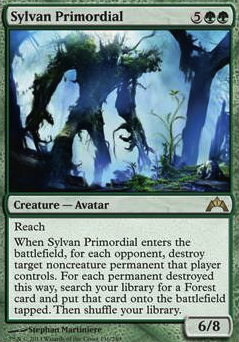 If you have both Jodah, Archmage Eternal and Morophon, the Boundless out on the field together, do they interact accordingly?

For example, suppose we choose God as the tribe. Morophon reduces their costs by WUBRG.

But Jodah says we can pay WUBRG instead of their casting costs.

If we elect to pay WUBRG thanks to Jodah, but Morophon reduces by WUBRG, does this mean that they can now be cast effectively for free?

Use Jodah and morophon to free cast Archaeomancer and omnispell. use omnispell to cheat cast Curse of the Cabal or Vona's Hunger. If you have something that makes your bois into mana dorks, you can use tradewind and intruder alarm to return archaeomancer to hand and something else then then recast them for free. when you play them, you can untap your board with the intruder alert and recast your spells again.

Sadly, you cant do recasts with Fraying Omnipotence as you lose your creatures. if there was a card similar to the mirror that can allow you to recast it, that would be chill but this combo seems like it has the right idea.

I think Sliver Legion and Brood Sliver are worth running since they're just good slivers. If you want to use The First Sliver as the commander, I don't really see a need for Sliver Overlord since it doesn't do much in the 99. I would highly suggest Morophon, the Boundless since it will help you play lots of slivers in a single turn.

Bolas's Citadel provides another alternate cost, so you can either cast it from your library for the Citadel's cost or from somewhere else for its own cost or Fist of Suns' cost. Note that the Citadel requires you to pay its alternate cost when you cast something with its ability, so you can't use Fist of Suns. A card like Future Sight that just says "you may cast" without giving you a cost to do so will work the way you hope.

I want to make sure if this combo works right. First we got Bolas's Citadel Second is Fist of Suns Third is Morophon, the Boundless With this combo would the converted mana cost of the creature be 0 or 5 or regular mana cost on the card? When playing/casting from the library.

okay....if I were to continue and feed Prossh, Skyraider of Kher and the tokens to Food Chain I MIGHT have enough mana to either cast Tiamat or whatever dragon in my hand like Beledros Witherbloom or Morophon, the Boundless or Ramos, Dragon Engine. So ramp leading to more ramp leading to tutoring leading to searching for ways to MAYBE close the game...