All Sliver creatures get +1/+1 for each other Sliver on the battlefield. Sliver me Timbers
by djlayze 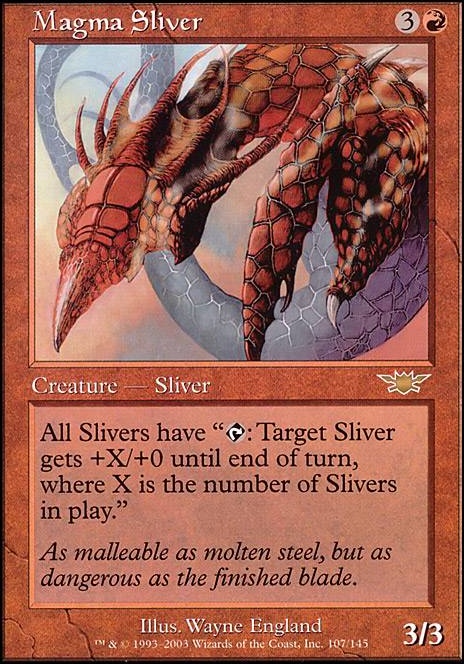 Army of Klendathu......
by Swagkage

Mind your Fingers
by KronosTitan668

Manaweft Sliver is another two drop mana Sliver. Shifting Sliver makes all your Slivers unblockable. Venom Sliver gives all deathtouch. These three Slivers could replace three of the higher CMC Slivers that have redundant effects. Blasphemous Act wrecks your opponents with Hivelord as Commander.

Wild Pair and Pyre of Heroes are powerful budget repeatable effects to tutor for and cheat Silvers on the battlefield.

Consider cutting a few of the lesser Slivers for more draw?

Nice Shock lands. On a budget you can do better than the Gain lands such as Blossoming Sands and Cycle lands such as Sheltered Thicket. Consider the Tango lands? Since there's 14 basic lands here.

The interaction of Primal Surge with Gates and Maze is interesting, but I don't think you need it because without Surge Gates are making the manabase really slow to cast Slivers especially to get five mana of all different colors to cast Overlord. Amulet of Vigor helps, but you can't count on consistently having it early game when you need it. In my opinion it's more important for gameplay to cast Slivers then to try to make Maze work with Surge.

I don't think Maze and Gates is wanted here because you're not playing other cards that have interaction with Gates especially land ramp that can search for and put more Gates onto the battlefield such as Circuitous Route . You have some really excellent lands for five colors and then there's the Gates which just doesn't make sense. Golos, Tireless Pilgrim is the five color Commander to play with Maze and Gates.

Amoeboid Changeling is an excellent Sliver with Overlord as Commander because of Overlord's ability to gain control of a Sliver. Use Amoeboid to make any targetable opponent creature into a Sliver and then gain control of it with Overlord. Since Amoeboid is a Changeling then it's considered a Sliver while in your library thus Overlord can tutor for it. Amoeboid could replace Might Sliver since don't really need it's lesser anthem effect when you have Sliver Legion also at five mana.

Hardhitta7 on Dig vs Cruise

What do yâall think about Draconic Intervention ? I kinda like it cause it doesnât hit my dragons but Iâm worried it wonât always wipe the board. My buddy plays Slivers and they get huge with Sliver Legion .

My Sliver Legion for his Damnation , Copperline Gorge expedition, and Alrund's Epiphany borderless?

Updating because he got a Sliver Legion .

Iâm doing these trades on behalf of my buddy. Heâs trying to build a Sliver edh deck. He has a commander now so heâs looking for the rest of the cards for the deck. Lmk if you have any you want to trade and are interested in any of his cards. Iâll update this with specific cards he wants as he builds the list. Right now he wants a Sliver Hive .

He has these cards for trade:

Lmk if we canât work out a deal, heâs been playing for a long time and has always wanted to build a Sliver deck.