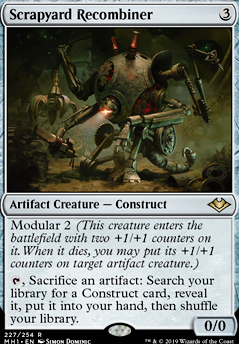 , Sacrifice an artifact: Search your library for a Construct card, reveal it, put it into your hand, the shuffle your library.

Elsha of the Finite Budget
by cgannon 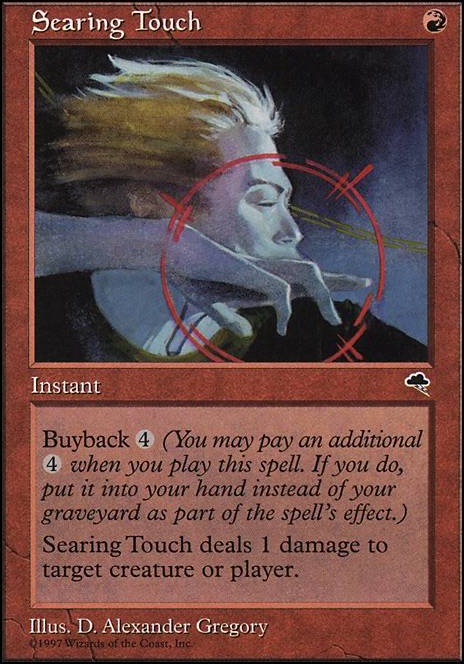 This list feels very good - a lot like the older Steel Overseer hardened scales lists. It might be a little too optimal for casual play, depending on the group.

In terms of being stronger, the main thing I'd look at is Lurrus of the Dream-Den - a single side slot makes the entire list substantially grindier, and splashing white is fairly simple with artifact supporting lands, also giving access to Esper Sentinel , Arcbound Mouser and Arcbound Javelineer if you want them.

If you aren't pushing for pure power, Scrapyard Recombiner likes constructs, which would let you run a weird Metallic Mimic tribal list. There are also various combo options.

Chalice of the Void usually is the counterpart to Power Conduit as they play very well together, but with the number of 1 drops you run, I'm not sure its an ideal choice, often needing to wait for 4 mana or more to be useful. Other answers are probably preferable

I understand you want to keep the deck budget, but Arcbound Ravager is responsible for like 80% of the power of normal modular decks (and also 80% of the price ._.). Without Ravager, I think you definitely need more sacrifice outlets because only 2 Throne of Geth s plus 4 overcosted Lightning Helix es probably won't cut it. I'd probably add more Thrones, but only one use per turn is a pretty big disadvantage. I was also going to suggest Scrapyard Recombiner but you don't really have any good constructs to tutor... (aka hangarback/ballista) so honestly I don't know. Maybe you could try 3x Throne.

Thank you for your comment hardhitta71194! Youre right, Pia's Revolution in combination with Sai, Master Thopterist makes a real fun combination, making your opponent having to decide between taking the damage or letting me cast an artifact again to produce a thopter and potentially untap Traxos, Scourge of Kroog and gain 2 life from Forsaken Monument is very satisfying. I actually did consider including Arcbound Ravager and Mishra's Bauble , which would of course both make much sense in this deck. The reason why i didnt is because, on one hand I was on a budget when building this deck and buying 4 Arcbound Ravager would have exceeded my budget. On the other hand, I kind of have this idea in my head that my decks always have to synergise perfectly and look good at the same time, which doesnt always make much sense. For example I couldnt include Arcbound Ravager because it wouldve been the only artifact creature in this deck thats not a construct, meaning i wouldnt be able to fetch it with Scrapyard Recombiner . Same with Mishra's Bauble , Im sure it would be great in this deck, but I cant include a card that lets me look at the top card of a players library without somehow using this information for another card. Colors of course had to be balanced too, 6 of every kind. So yea, Im sure there are quite a few things to improve here, but this is the best combination of a small budget, utility, appearence and synergy i could come up with. Thanks again and have a good day!