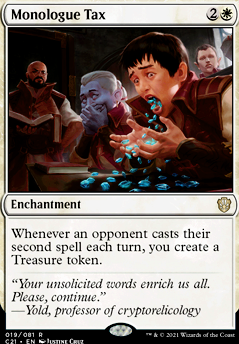 Whenever an opponent casts their second spell each turn, you create a Treasure token.

Dungeons with Fun!
by Eddloker

Reducing the whole color to just Smothering Tithe and maybe Monologue Tax goes a little too far, if you ask me.

Stardragon on Are Treasure Tokens Now too â¦

I feel like they making to many for each plane (1 or 2 a plane isn't bad but more than that is too much unless the treasure itself is a focus (like on Ixalan).) but once again green is getting way to much and unneeded treasure support while colors that need it (namely White and blue) are getting shafted yes ik white has Smothering Tithe and Monologue Tax but that's it (at this point I almost feel like Wizards should just cut white from the pie they shaft it enough as is and don't really give it the love it so desperately needs (and white is my least played color and even I can see the lack of love they give overall).)

So to reiterate while I like treasure as a concept they to 1. dial it back a bit on the amount printed and 2. focus on giving them to the colors that need it (again not green!!!!)

Cathars is an amazing card but works well when you're able to get multiple creatures on the field a turn (especially with tokens), with Angels you're usually doing 1 or 2 due to higher CMC and white isn't the best at ramp as it is however, its definitely not a bad card and will still put in work in the deck so if it's a pet card feel free to keep it in

Also if you're gonna go anthems and add more enchantment anthems you could look into Mesa Enchantress and of course Sigil of the Empty Throne if you decide to lean heavier into enchantments as well. Smothering Tithe and Monologue Tax will also be easy adds for the ramp unless you don't own tithe that cards expensive these days lol.

Pascal1993 I would take out some of the bigger and expensive cards for more interaction, tutors and removal. With this deck, in wanting to get all the cool dragon stuff in, there's a tradeoff of slots you're allowing yourself to be able to do that. With everything I have included, I want to be playing these dragons which can only leave so much room for the cheaper cards mentioned.

Delrimus Thanks! I haven't really because there's a lot of situations where you're wanting to drop this card and attack to get the trigger and expecting the table to go around a whole turn is just asking too much. And there may be even some instances where you don't have a 6 power dragon as there are some lower power dragons in the deck. These types of effects are more efficient on other cards like Sneak Attack which I think are better for the deck.

Drboom151 Other fetches, expensive tutors, original dual lands, etc. They don't really add to the dragon themed deck idea. You can certainly do it if you have the cards/want to. I just don't think they're necessary for what I'm wanting :)

Willen So Bootleggers' Stash does nothing in this deck that can't make use of the artifacts or is a dedicated lands deck. Even if it combos with one dragon, which is one asking for a lot and two isn't good enough. It's a 6 mana do nothing artifact when you cast it. Then during your next turn, to make use of the effect, you have to cast nothing to get treasures. Sure you might be able to make 1-2 mana at the end of each turn if you don't use all your mana but there are cheaper cards that can do that better and expecting this card to live when artifacts can be easily destroyed in this format just isn't enough. It's better in a Korvold deck where you can instantly convert it into actual resources. Atsushi, the Blazing Sky isn't exciting enough or impactful enough for me to include him. The first effect might end up in spots where you're not able to actually cast the cards and lose out on access to them in your deck. And even if there are a small amount of treasure synergy cards, having 3 cards to justify when the list is already tight isn't enough for me. Plus there's going to be better dragons coming in the future. With Smuggler's Share, I was on this card when it spoiled but after looking it, I compare it to Rhystic Study. I don't have it in the deck anymore as I felt like I didn't need it on top of the other dragon related enchantments I already have. Even if I'm able to get the value on other peoples turns, it feels very Monologue Tax like to me as I'm always wanting it to trigger rather than having to rely on my opponents. So if I'm not running Rhystic, why bother running this? And no, Silumgar's Scorn doesn't justify running one counter spell. If I wanted this effect, I would just run Counterspell. But having these few slots dedicated to a small things dilutes the deck. If you're does a lot of small things of things then it doesn't do anything. I'm wanting to ramp and cast dragons early and start beating face. If my dragons die, that's okay I'll just bring them back later. Having one ace in the hole counterspell for when your stuff is about to get destroyed is a very specific scenario for wanting one of this of card. Not to mention they could a counterspell of their own and theres two other opponents. You'd want to run more of these types of cards which I'm not interested in doing.

Looks fun, though 33 lands may be a bit slim considering how much white struggles with mana, especially with so many colorless sources in your lands. The last thing you want is having to mulligan over and over to even get the second white for your commander. I'd suggest Playtesting the deck (either with the Playtest function or IRL). You also might want to consider Smothering Tithe and Monologue Tax. Maybe even Sword of the Animist.