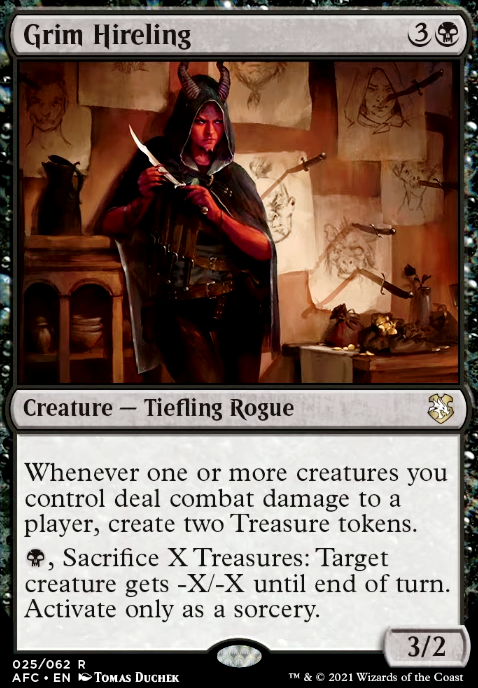 Whenever one or more creature you control deal combat damage to a player, create two Treasure tokens. (They're artifacts with ", Sacrifice this: Gain one mana of any colour.")

, Sacrifice X Treasures: Target creature gets -X/-X until end of turn. Activate this ability only as a sorcery. Back to card comments

Shield counters are neat, could maybe see them on black too since they're pretty similar to regenerate

Mestros Diabolist: how is this not a Warlock?

Evelyn: Don't have to cast collected cards on just your own turn, so e.g. Leyline of Anticipation can provide quite a lot of value here. Can't think of a lot of ways to make a lot of vamps in grixis tho.

Professional Face-Breaker: treasure-on-damage has always felt like a strongly red mechanic to me (shaking my fist at Malcolm and Grim Hireling), so I'm glad the color if finally getting the more go-wide-friendly version of this effect. Built-in evasion AND impulsive draw makes this solid.

Kros: sketching out a deck, lets see how it goes: Kros, Defense Contractor. A bit sad that Curse of Predation doesn't work as well as it could since the goad will run out before the enemy creature has a chance to attack again.

Phabine: dunno why it's so conservatively costed, especially when parley has the downside of giving people cards

glhfJKiHax, your build is awesome!! makes my build stand in the corner. Grim Hireling is indeed a nice card, I don't think I have room in the 99 for it, since my build isn't aggro heavy and missing a few overrun type spells and abilities, but do see it working in your build. Great inspiration, will definitely try out a few cards.

Great deck. I love seeing how other people put their Lathrils together.

I have been finding that Grim Hireling does a bunch in my deck. Is it something you think you would consider?

Leonantti on How does the tokens section â¦

ivaggione Hey, thank you for your replies. I really appreciate that you are trying to deal with these issues as they come up.

Unfortunately the "tokens displayed from the same printing as the card that makes them" does not work in some cases since, for example, my Mill Among Thieves has only one card that makes the Treasure tokens, Grim Hireling, which is from the set D&D: Adventures in the Forgotten Realms but the token displayed in the side bar and playtest is still from the Crimson Vow set.

Could you please, please implement a functionality that when checked in the editor would ignore what tokens the cards create and only look at what tokens are added to the token board in the editor and then list those in the deck's side bar token section?

Leonantti on How does the tokens section â¦

ivaggione Hey, I tested it and it should be working, thank you! Though while testing I noticed some issues:

I heard of another card too suggest here, not sure of you have seen this one before, Druids' Repository, i thought it might be better than Grim Hireling.