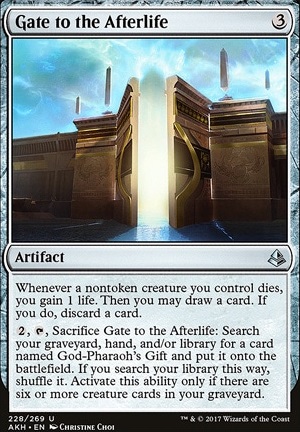 Gate to the Afterlife

Whenever a nontoken creature you control dies, you gain 1 life. Then you may draw a card. If you do, discard a card.

, , Sacrifice Gate to the Afterlife: Search your graveyard, hand, and/or library for a card named God-Pharaoh's Gift and put it onto the battlefield. If you search your library this way, shuffle it. Activate this ability only if there are six or more creature cards in your graveyard.

This is why we can't have nice things...
by Jagg3r5

Gate to the Afterlife Discussion

There's a Quake In My Boot!

I don't know what your budget is, but this seems like an ideal deck to be running some sort of fetchlands, even the common variants. They let you recur Bloodghast an additional time and even grant extra damage from Mayhem Devil . Hofri Ghostforge and Rekindling Phoenix feel quite slow relative to the power of their effect. It also seems a shame not to have as many black creatures available to sacrifice as possible for the sake of Teysa, Orzhov Scion , although I could also see Pawn of Ulamog fulfilling a similar role. Maybe something like Gutterbones , Reassembling Skeleton , or a combo of Relentless Dead and Gravecrawler could prove useful. There's also Grim Haruspex as another way to refuel or Gate to the Afterlife if pitching cards is important.

Cast Out would give you removal you could cycle away on bad matchups.

Instead of Offsring's Revenge, I've seen a deck use Gate to the Afterlife and God-Pharaoh's Gift. Something to consider.

Commander's Sphere -> Thought Vessel: having a lower cost and the ability to have unlimited hand size is great here.

Gate to the Afterlife -> Bastion of Remembrance: i like the first but the second is great because it gives a body and the artist effect to combo off

Ogre Slumlord -> Chittering Witch: the first is far worse than i expected, the second gives usually 3 tokens to sacrifice

Gauntlet of Power -> Extraplanar Lens: as above.

Sheoldred, Whispering One -> Tombstone Stairwell: the first looked like the kind of card that does anything i was looking for in this deck. Unfortunately, i usually end up not casting her because of her high mana cost. The second gives a bunch of tokens each turn and works great even if you don't pay the comulative upkeep.

Grumgully comboes with Persist creatures (such as Scuzzback Marauders for example) by giving them +1/+1 counters when they ETB which negates the -1/-1 counters persist generates. Add a sac outlet like Ashnod's Altar (Infinite Colourless Mana) or Goblin Bombardment (Infinite Damage) and you're laughing. Other choices like Impact Tremors / Gate to the Afterlife / Guardian Project / Overgrowth Elemental / Altar of the Brood add advantage around the combo, and Rhythm of the Wild is a substitute Grumgully while also adding uncounterability to your creature pieces.

I'll add this explanation to the intro, but I hope it helps explain it!