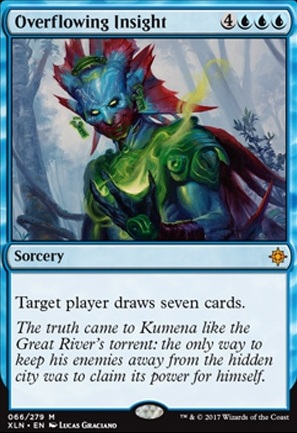 Overflowing Insight occurrence in decks from the last year 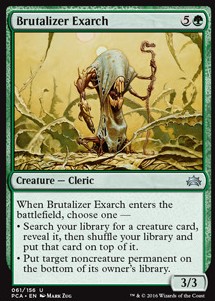 I would still suggest splashing black. If you did Doom Whisperer would be a really great addition to this deck, as you can get rid of as many cards from your deck as you have life. Creeping Chill would be excellent if you put more mill cards into the deck instead of card draw. I might cut the Search for Azcanta  Flip because when it flips it puts the card on the bottom of your deck instead of your graveyard. I would add an Overflowing Insight for top end drawing power and go up to four copies of Jace, Wielder of Mysteries as your deck is kind of built around him.

Flooremoji on Advertise your MODERN deck!

Master_Tame: Your deck looks interesting! I would consider adding some more lands, most controlling decks run around 26, and Overflowing Insight isn't getting any cheaper!

You don't have much combo hate in your main, I would cut some of the Lifegain cards to add some countermagic.

JTMS is still crazy, proably could use some, but not neccesary.

Telling Time would probably be better as Serum Visions or Opt , the 1 mana can really make a difference.

I would also check the gatherer to see if there are any older modern legal cards that are similar to Wheel and Deal , there were a lot of cards that looked pretty questionalble. Good Luck!

Forcefeed to Concede is my Bant mill deck where Overflowing Insight is also a star. It works well with an enchantment called Induced Amnesia . Isnât milling the greatest?

This is a forcefeed mill deck that absolutely wrecks people. Itâs a lot of fun to play. It uses a combination of Smothering Tithe , Overflowing Insight and Induced Amnesia to force my opponent to draw his whole deck. Games typically end with my opponent conceding, hence the name Forcefeed to Concede!

I could really use some help developing the sideboard though. What does this deck need? What is it weak against? Your help is appreciated.