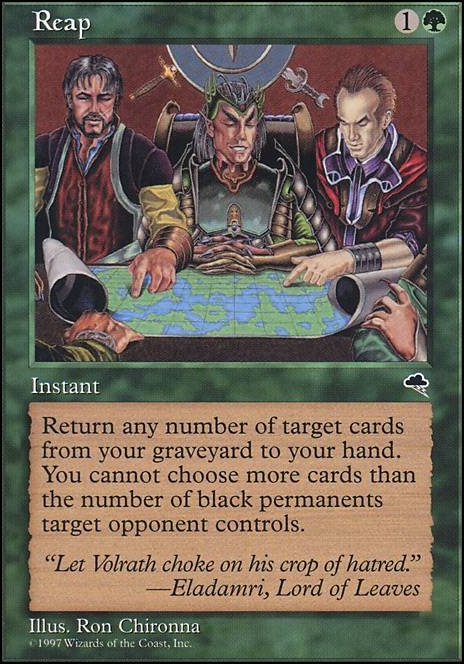 Return up to X target cards from your graveyard to your hand, where X is the number of black permanents target opponent controls as you play Reap.

Jarad the combo lord
by Saredio

You want to play Reap and Compost in this deck 100%

Love seeing Multani. His later form is my favorite deck in my collection:

Have you considered running Reap. There are cases where I run it in place of Eternal Witness. It is cheaper to cast and in many 4 player games, it consistently nets you more than one card returned.

I try out the card Reap a few times on of those online site to plays edh . But it didn't really work out the way I expected it to work out . But most of the time we just need the one card so Regrowth or Noxious Revival would be a better option in my opinion

Nice list! Have you tried Reap out? I personally think that card is insane!

I would recommend adding in Reap. With how popular black is in the format, I'm certain it will be worth it's price tag $$$.