Whenever another creature you control dies (is put into a graveyard from the battlefield), you get an experience counter.

At the beginning of your end step, choose target creature card in your graveyard. If that card's converted mana cost is less than or equal to the number of experience counters you have, return it to the battlefield. Otherwise, put it into your hand. Dama and Vesh, Reclaim your Resin!
by Fudgefalcon 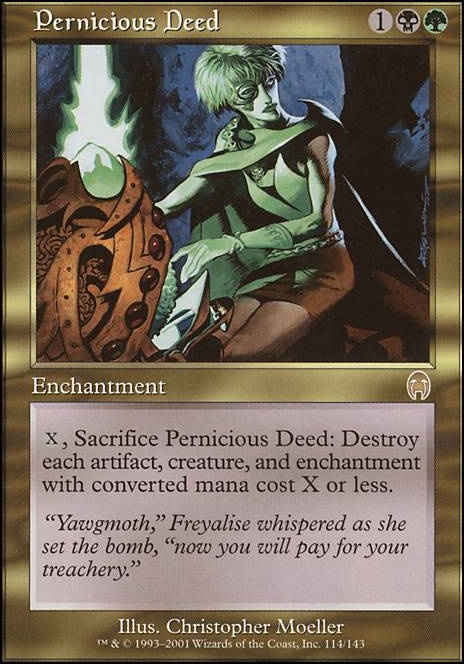 saluma on Your Favorite Plays

One of my friends have a Meren of Clan Nel Toth with Spore Frog in it. I have a Nikya of the Old Ways deck. When he gets his spore frog its really difficult for me to win. But I had a sweet victory last time we played.

T3: Forest + Forest + Mountain + Nikya of the Old Ways + Xenagos, God of Revels + (give xenagos buff to Nikya and swing)

He had only one creature so he couldnt block enough dmg. I didnt win the game due to a boardwipe 2 turns later but i took out 2 players with my fast wurm

LimbicCircus thanks for the comment. I love Meren of Clan Nel Toth one of my favorite decks ever to play. Most of my wins come from either Grave Pact or similar card and recurring over and over a card like Merciless Executioner. Add that in with any of the aristocrat cards like Zulaport Cutthroat and it's just sick. It also has Exsanguinate very good black finisher. Plus recurring cards like Gray Merchant of Asphodel or Kokusho, the Evening Star just plain great.

I use Meren of Clan Nel Toth as my commander for my reanimator deck, but for a long time i considered porting it into a Muldrotha build. I ultimately decided not to however. This deck looks really solid, i like it. Stitcher's Supplier is an insanely underrated card in decks like ours and I love to see you playing it here. Given the minimal number of Basic lands you run, you may consider Hermit Druid as an additional way to mill yourself. Be careful with it though, because it is a known combo piece that can instant win in the right builds, you may have to give some people a heads up that you wont instant win with it.

I am working on an eldrazi colourless list that may help for some suggestions for tutors and removal: In The House of R'lyeh...

If you are wanting removal and ramp and wanting to stay away from colourless, try going black green then or blue green. I have a blue green list that ramps like crazy, I don't play as many eldrazi cards in it but blue still gives you some removal in bounce spells and counter spells to protect your guys.

all the above are amazing for ramp

Whether you go blue or green is up to you

Blue green: counter spells, draw spells, and Cyclonic Rift (this is my Blue green list, I would suggest running Kruphix, God of Horizons as your general over Zegana who I just use to refill my hand around Turn 5-8 to push me over to winning: Nature's Revenge, TO is not recognizing it but it should be on my page)

Green black: kill spells, better tutors, reanimation (go Meren of Clan Nel Toth as your general maybe? I can offer advice on how to build that, my uncle has a pretty good Meren list)

Kresh needs a girlfriend, and I don't think Rakka Mar is up to the task. How about Meren of Clan Nel Toth ? Nice synergy with Winding Constrictor and a few other things.

I was wandering if it would be worth running Meren of Clan Nel Toth in the 99 of my elf tribal deck with Lathril, Blade of the Elves at the helm. Only running two other non elfs being Craterhoof Behemoth and Seedborn Muse . Any feedback would be appreciated.