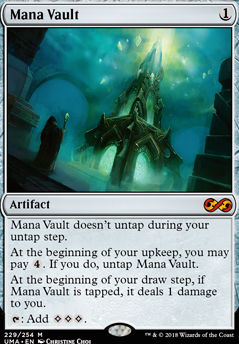 At the beginning of your upkeep, you may pay . If you do, untap Mana Vault.

At the beginning of your draw step, if Mana Vault is tapped, it deals 1 damage to you.

Sefris of the Hidden Ways
by Fjorynn

The Machine (The Pit of Despair)
by AlistarFiend

I saw your update and I think your list looks much more streamlined!

Let me try to go over why mana rocks tend to be super important in Commander. Mana Rocks are a term folks use to talk about artifacts that produce mana on their own. They are usually considered a form of 'Ramp' which just means that they are cards that help you make more mana than you would normally have if you only played one land a turn. Ramp is named after the card Rampant Growth which is a fantastic card since it allows you to get an entire extra land out. At any rate, the idea for ramp is that, by investing in some cards early on, you will gain access to more mana in later turns than you would if you were only playing one land a turn. So for example, if you play Commander's Sphere on turn 3, next turn you would theoretically have 5 mana to use on turn 4 (if you played a land), 6 mana on turn 5, 7 mana on turn 6, etc. Though it seems kind of bad spending mana on a card that doesn't do anything right away, that Commander Sphere will give you value throughout the whole game (or until it gets removed). That being said, not all ramp is considered equal. You are right on about Sol Ring being much better than Commander's Sphere. Ideally, you want the most mana per cost that you can find; Sol Ring is so good because it essentially pays for itself plus some! Finding mana rocks as good as Sol Ring is difficult and expensive (things like Mana Vault, for example) so players are always on the hunt for the next most efficient ramp pieces.

Each color is also not equal in its access to ramp. Green has a ton of cards that allow it to just grab extra lands but most other colors have a much harder time. Mana rocks are really nice for Red and Blue especially since they really have a hard time finding meaningful ramp in their colors.

Ramp is also especially good if you can chain them together. Playing Sol Ring on your first turn and then using Ring's mana to also cast Talisman of Creativity is a huge advantage. After playing a land on your second turn, you would have 5 mana to spend; that means on turn 2, you are now able to cast cards you normally would have had to wait until your 5th turn to start playing!

Hopefully some of that makes sense! Feel free to let us know if you have any questions about it to!

If you do want to add Freed, I would recommend finding space for Kiora's Follower. It's a good card which kind of bridges the land/dork/rock spaces and I have had a lot of success with it in the past. With Freed from the Real on it, it combos with Simic Growth Chamber but you can also look at adding High Tide which both combos with Palinchron but also with an Island and Freed+Follower.

That and Follower is just bonkers with either Sol Ring or Mana Vault. Just make sure you get the promo art one, it looks much cooler.

Most resent cuts that have been made based strictly off of memory.

-1 Mana Vault for +1 Culling the Weak

Why: both are fast mana, Culling of the Weak is faster and less lethal to me over time

why: Glasses are cute, i need access to combos or other anything else, hand knowledge is not often needed.

Why: Because nice things are nice (fast mana is essential in this build)

Carpet of Flowers is another essential card to generate mana.

My Muldrotha decks typically carry between 45 to 50 cards that generate mana, giving the deck the ability to act and react in good time.

I realize I completely misread your comment, ignore my prior message

However, here is a magical Christmas hand

I don't keep up with cedh at all just play casual with a group of friends but going off what TypicalTimmy said I'd assume it is because he is a turn one first strike, menace, trample so built in evasion and will surely land commander damage early on. Paired with Colossus Hammer you are looking at a win in 2-3 combat steps perhaps one if you slap double strike on him.

If you want to take Rograkh, Son of Rohgahh in another direction he is a guaranteed cheerio. Pair him Crimson Kobolds and Cloudstone Curio and you can get infinite etb or cast triggers. So with Birgi, God of Storytelling Â Flip or Impact Tremors you can get infinite mana or infinite damage respectively.

So a potential magical hand you are looking for in cast order is:

If I did everything correctly these are two turn one wins but I may have messed up somewhere but you get the gist of it.