, : Proliferate. (Choose any number of permanents and/or players, then give each another counter of each kind already there.) 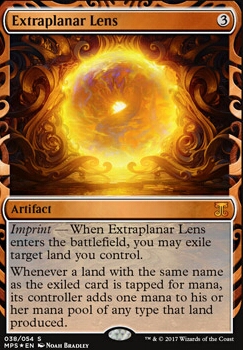 So a land you may want to consider is Cascading Cataracts... if you fetch it with Golos you can use it to make sure you have the chromatic mana you need to activate him.

You may want to consider running "draw-sevens" like Wheel of Fortune, Windfall, Diminishing Returns or Timetwister (if you're loaded). They're really, really good with Narset, Parter of Veils.

If you end up with a lot of mana on your turn you don't know what to do with (I'm having trouble envisioning how this deck plays) you might want Karn's Bastion in the mix.

Depending on your moral compass you might also consider Stasis. It's a hard lock with Teferi, Hero of Dominaria and an almost-hard-lock with Smothering Tithe.

I'm surprised with all your dual lands you're not running moxen... is there a reason why? I feel like Mox Diamond, Mox Opal and even Mox Amber have a pretty reasonable chance of being busted in this deck. Also Mana Crypt.

Savor the Moment is a good way to get extra value from your planeswalkers.

I thought Iâd put Karn's Bastion in! Iâm not too keene on Grim Affliction as itâs a only going to work once,

Contagion Clasp & Attrition both great shouts, canât believe Iâve missed them as theyâre a shoe in any sac deck.

Endrek could fit in too, Iâm currently thinking of what to cut as thereâs a few in the maybe board I want to add in too haha.

if you run Attrition with cards that generate you tokens to sac likeEndrek Sahr, Master Breederit would feed into your death triggers as well as fuel Yawgmoth's counter ability. imo you should strongly consider proliferate with things like Contagion Clasp, Karn's Bastion, Grim Affliction to multiply your -1/-1 counters.

okay. I also run a Kenrith Win con deck with a caveat of no interaction with other players making the deck a true solitaire deck . Here are some notable cards I recommend and also strategies.

The rule of thumb while tinkering with my Kenrith deck is 1:1 ratio (2:1 for some strats). For example, 3 cards are responsible for winning the game using life gain. Celestial Convergence Felidar Sovereign and Test of Endurance . This means that your deck should consist of 3 ways (not including kenrith) to assist with the life gain strategy. There are gem cards that assist with two different type of alternative wins that are honestly life saving cards. BY this rule, it can help you limit to what is needed. Having 3 supportive cards central to 1 wincon card is a waste of space and those supportive cards become dead in your hands without a tutor or that actual win con card.

Here are some recommended cards to help with alternative wins

Wall of Blood - Now this card is real awesome. It assists with Near-Death Experience . Drop this card and near death experience together. In response to the upkeep trigger, use wall of blood to get your life total to 1 while having Angel's Grace as a response to pingers or burn. Wall of blood also assist in Mayael's Aria if you have the life count for it. 2 birds with 1 stone.

Scapeshift - this is for maze's end, however can also get some really great utility lands such as Kor Haven Maze of Ith Karn's Bastion or simply to mana fix. Work's well with Field of dead

Pir, Imaginative Rascal - Better proliferate, halves the time. He can reduce your work of Helix Pinnacle to half by activating the ability 1 at a time to get each of pir's trigger.

Hermit Druid - Just don't run basics and you get a cheaper, consistent Morality Shift without a need of an empty graveyard. 2 birds with 1 stone if you have 20 creatures and Mortal Combat . Get him back with kenrith if he get's shot down, give him haste... you already know

Demonic Consultation - With the lab man wincon. Just name a card not in your deck. and win on your upkeep. Basically better than Morality Shift or Leveler

Artifact lands and Dryad Arbor - Helps with Happily Ever After condition

Alhammarret's Archive - This is a feel good card. You draw more, you gain life faster. Good with those life gain win cons. Imagine putting a Mechanized Production on this bad boy. Glorious honestly.

some of these cards are way out of your budget if you have one. But honestly, this is more a joke thematic deck so why not proxy if your group allows. I always proxy my lands..

I really like the idea of Fae of Wishes . What would you recommend removing? Or what are the weakest cards for this deck?

I also thought of adding Incubation Druid and Courage in Crisis in place of Contentious Plan , but idk if card draw or getting the +1/+1 counter on Druid would be more beneficial.

Also, Karn's Bastion , necessary or no?