Whenever an artifact enters the battlefield under your control, Reckless Fireweaver deals 1 damage to each opponent.

Plunder Down Under
by unstable_anomaly

i've been looking around for this topic and didn't find any combo resembling this so i wanted to ask if i am just mistaken in my train of thought, because normally the community has thought of every crazy combination that is possible

If i have something out like Reckless Fireweaver or Fuming Effigy this is basically an instakill all opponents and i wouldn't even need Sol Ring, but any artifact producing 1 mana would be enough

A Little more complicated would be Goblin Welder out with Dross Scorpion and Liquimetal Torque and one artifact creature in the yard, one on the field

infinite ETB, infinite leave graveyard triggers, theres several ones that would be an instakill, draw infinite...

so let me know if i missed something and this complete bullshit, or if this would actually work

Hey not a bad list you got here to start however I am seeing one glaring issue and that is simply that I don't really see a way for you to win games? You need some sort of way to deal damage with the artifacts entering and leaving the battlefield. Best options are Mayhem Devil, Reckless Fireweaver, or the greatest Marionette Master. Also, I have a special place in my heart for the spellbombs and even the implements but they generally don't stack up to the power level of most EDH games. I would also think about cutting down a few lands and adding some more treasure synergy. I rarely play more than 35 lands any more thanks to the inclusion of MDFC Lands and plenty of new treasure cards. You're definitely off to a solid start though!

Your deck seems more competitive then I normally build. Hope this helps.

I have found that Reckless Fireweaver does great work in Prosper, and even Disciple of the Vault isn't bad, either.

I never would have thought of putting Reckless Fireweaver in this deck. Good thinking!

I'm getting the Strefan pre-con for Christmas, so I'm looking forward to tinkering with it. Looks like a dope build you've got here.

Not 100% sure there's room for either, but Reckless Fireweaver and Disciple of the Vault add an interesting edge to the equation.

Florian, Voldaren Scion can be impulse draw on each of your turns, nice dig into library as well as can potentially trigger the same turn you play him. Life lose from opponents doesn't have to come from combat damage it can come from any source such as Reckless Fireweaver. The nice thing about the repeatable impulse draw from Florian is he doesn't have to attack where as Chaos Channeler does and it can have problems surviving combat.

Hey, I like your approach on that commander :) I have a Prosper Deck yself and I focus a lot more on the treasure part. That is why I run cards like Xorn, Reckless Fireweaver, Revel in Riches or Academy Manufacturer. I feel that it really notches up the commander quite a bit.

Maybe check out mine and tell me what you would improve :) Live Long and Prosper 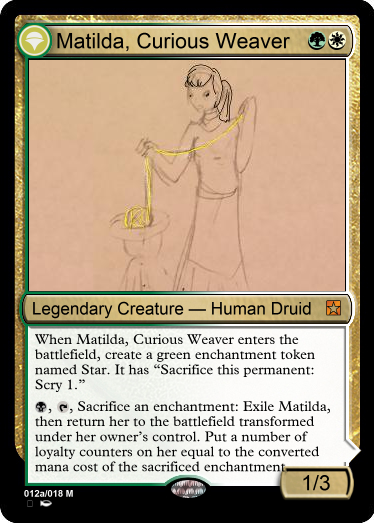