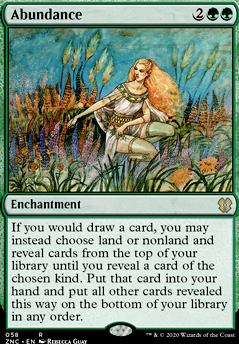 If you would draw a card, you may instead choose land or nonland and reveal cards from the top of your library until you reveal a card of the chosen kind. Put that card into your hand and put all other cards revealed this way on the bottom of your library in any order.

Sigarda, host of herons
by lukash 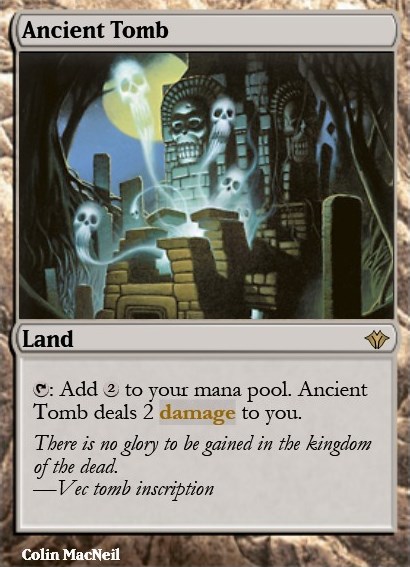 The enchanting trick deck
by heraldofkrenko

Another card that is always good value for me is World Shaper . I think you have more than enough land sacrifice to make it worth playing. I personally like to play it and then God-Eternal Bontu , sac it and all my lands to draw a ton, then get all of my lands back.

I don't play Nahiri's Lithoforming in my Korvold deck, but I play it in Obuun and feel that playing Abundance is important for ensuring I draw enough lands back. Otherwise it's a high-risk card (especially if you play against decks that can restrict draw, Abundance replaces draw so cards like Narset, Parter of Veils don't affect you).

hello, I like your deck a lot. what do you think about Abundance in the deck? It could provide you with the right amount of lands every turn in combination with damia, am I right? or is it just too slow?

Ah, nvmd, I see Abundance could protect the deck out. Still, might be risky if Abundance was destroyed earlier in the game.

Btw, I found another combo while goldfishing: Aesi, Tyrant of Gyre Strait 1 / Tatyova, Benthic Druid + Retreat to Coralhelm + Sakura-Tribe Scout / Llanowar Scout + Abundance : Play a land, use Aesi or Tatyova to dig for another land with Abundance. Put down the land with either of the Scouts. Use Retreat to untap the Scout, find another land with Abundance, rinse and repeat to put all lands from your deck onto the battlefield. Use the final land to fail to flip a land with Abundance and stack your deck in any you want. This basically results in letting you tutor for any card from the deck every single turn.

How does Abundance work out for you? I used to have it in my Ezuri deck but it felt a bit slow and revealing every card I drew really hurt in the endgame.